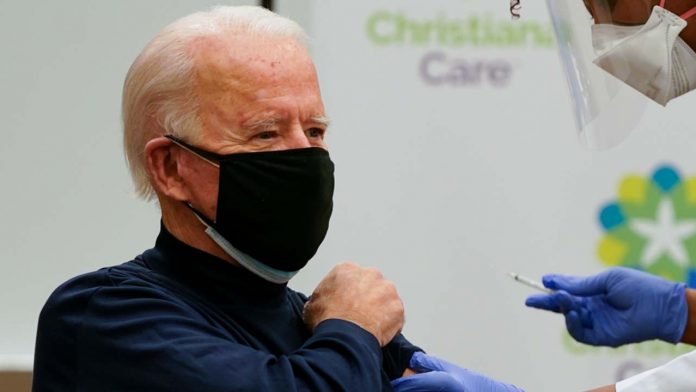 The president of the United States, Joe Biden, celebrated on Thursday that the country has already applied 50 million doses of the vaccine against COVID-19 and has asserted that the inoculation is going “in the right direction, despite the disaster inherited by the previous Administration “.

“The more people are vaccinated, the faster we are going to beat this pandemic. That is why one of my first goals in office when, just before taking the oath, I indicated that my goal was to get 100 million injections of the COVID-vaccine. 19 in the arms of the people in my first 100 days as president, “Biden recalled in a speech from the White House, where a ceremony was held in which several people were inoculated.

The US president lamented that “critics said that this objective was too ambitious” and later stated that “it was too small”, but, as he has influenced, “the United States will be the first country, perhaps the only one, to achieve it.”

In this context, the president has underlined the application of 50 million doses in “only 37 days” since he assumed the presidency, a figure that is reached “weeks before scheduled” and despite the “setbacks” of the recent storms of winter.

“We are moving in the right direction, despite the disaster we inherited from the previous Administration, which left us without a real plan to vaccinate all Americans. Every time we administer another 50 million vaccines I will use that milestone to inform the people. American about our vaccination program and about our general fight against this pandemic, “he added.

Biden has also pointed to other “milestones” related to the coronavirus vaccine, such as the increase in the distribution of vaccines to the states by 70 percent or that about 60 percent of those over 75 have received the injection. , among others.

“My team has worked very hard with the vaccine manufacturers, Pfizer and Moderna, to ensure that we have enough supply for all Americans by the end of July. When we discovered that vaccine manufacturers were not being prioritized when it came to securing the supplies they needed to make the vaccine, we solved the problem, “he explained.

He also pointed to the “promising” efficacy news of Johnson & Johnson’s single-dose vaccine that the Food and Drug Administration (FDA) is reviewing.

“We are going to do this the right way. The FDA will decide on an emergency use authorization of a vaccine based on science, not due to any political pressure from me or another person. No external factors,” he added about the approval of this immunizer.

According to Johns Hopkins University, the United States accumulates more than 28.4 million cases and 508,000 deaths due to COVID-19.