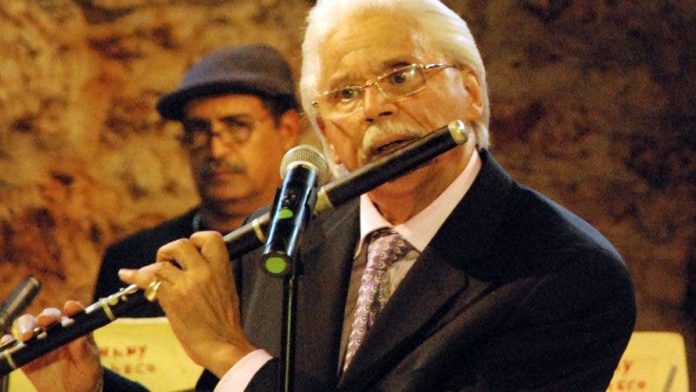 The legendary Dominican musician Johnny Pacheco, considered the father of salsa, died this Monday after not exceeding the state of gravity in which he was in a hospital due to pneumonia. He was 85 years old.

With his death, Pacheco leaves a historical legacy in a tropical genre such as salsa that spread throughout the world to the rhythm of his steps, to the sound of the instruments that he introduced and to the warmth of generations that keep her in suspense and perennial. party.

His stamp on salsa remains in many historical actions, among them as founder of the famous band Fania All Star, where vocal successes such as Celia Cruz, Rubén Blades, Pete «El Conde» Rodríguez, Héctor Lavoe, Eddie Palmieri, Héctor Casanova, Ray Barreto, Willie Colón and Bobby Valentín, among others, rose to stardom.

Juan Azarías Pacheco Knnipping, his real name, suffered from Parkinson’s for a few years, but was hospitalized since Friday for pneumonia.

His wife, Cuqui Pacheco, had asked for prayers for his health. “God bless you all. The family of teacher Johnny Pacheco requests a chain of prayer for the health of him, who in these days was admitted to an emergency hospital due to pneumonia. We ask for privacy at this time, we will keep you informed, “he had written.

Considered one of the creators of salsa in the 1960s in New York and of the Fania All Star, he was born on March 25, 1935 in Santiago (north of the Dominican Republic) and emigrated as a child with his whole family to New York, where he began his studies and musical training.

With more than twenty albums and multiple awards, Pacheco founded what would become the famous band Fania All Star, where figures such as Celia Cruz, Rubén Blades, Pete “El Conde” Rodríguez, Héctor Lavoe, Eddie Palmieri, Héctor Casanova, Ray Barreto, Willie Colón and Bobby Valentín, among others, excelled in their careers to stardom.

The Dominican Republic paid him several tributes during his life, including the presentation of the main Casandra Award in 2009.

“How much I would have wanted my father to be here tonight (…) at the age of six he made me listen to a symphony and told me, ‘Let me see if you are not like your brothers, deaf people,’” exclaimed the conductor and music producer at the time of receiving the Cassandra statuette in 2009.

The artist, aided by a cane, was honored for a special reason with the interpretation of “I celebrate your birthday”, which was started by Marivel Contreras, then president of the Association of Art Chroniclers (Acroarte), and which was joined by a packed Theater Eduardo Brito National.

Earlier, in 2008, the Banco de Reservas (Banreservas) paid him a tribute that included the edition of an album with his successes in the voices of international figures.

In 2014, the “Yo soy la salsa” event, produced by Andrés van der Horst Jr., was organized at the Jaragua hotel in Santo Domingo, which was filmed as part of a documentary about the life of La Fania’s mentor 50 years ago. with Italian Jerry Macucci.
For this film work Pacheco was present in the Dominican capital and in the artistic show they sang some of his emblematic songs.

To a full house, the musical show at the Jaragua also celebrated Pacheco’s 80th birthday.
The artistic activity had the participation of emblematic musicians and singers who were part of the prestigious musical institution founded by the native Dominican clarinetist and conductor of Los Pepines in the city of Santiago.

The first to make the auditorium vibrate were the 15 Dominican musicians led by Ramón Orlando, whose quality was praised by Johnny Pacheco when he first accompanied Milly Quezada on the song “Quimbara” and then Alex Matos with the song “Look at it upside down” .
The show included “Cúcala”, a salsa popularized by Celia Cruz and performed this time by Amara La Negra.

Sexappeal performed “Esa prieta”, while Adalgisa Pantaleón fought in the manner of her “Toro mata” and José Alberto “El Canario” endorsed “The essence of guaguancó”.

On the stage that time, Michel “El Buenón” also passed by singing the classic salsa “Las chicas” and the highlight of the tribute to

Pacheco in 2014, according to the specialized press, was when Cuco Valoy made “Agua de clavelito” rain on his voice, with the improvisations of Mozart La Para.

These salseros rumbled at the La Fiesta del Jaragua theater when they marked “Hey how delicious the stars of Fania sound”, “Take off the mask”, “Señor sereno, why is it killing me?”, “Don’t tell me it’s too late now” and “María Luisa”, in the voice of Ismael Miranda, who was called “El Niño Mimado de la Fania”. Cheo Feliciano sang “Anacaona and“ El corazón ”.

In the end they all played together with Johnny Pacheco on scene he enacts “Quitate you”, to say goodbye to Yanfourd, David Kada and Ruth, who made the popular “My people” sauce.

In 2017, the Pacheco family received special recognition from the then mayor of Santo Domingo Este (ASDE), Alfredo Martínez, and the president of the Chamber of Deputies, Rubén Maldonado.

The Boulevard Johnny Pacheco, located on a section of Avenida España, between the Juan Carlos Bridge to Calle Cuarta, was also opened.