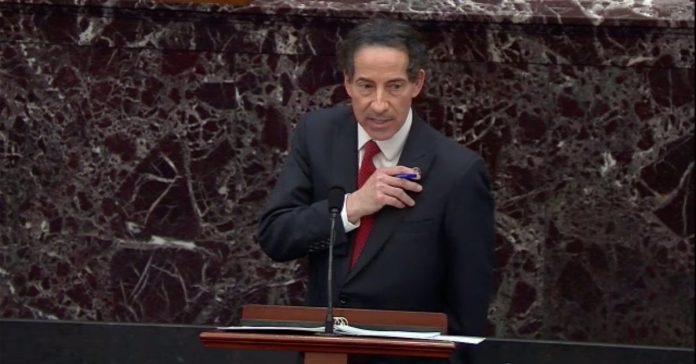 The main spokesman for the accusation against Donald Trump, the Democratic representative for Maryland Jamie Raskin, has opened the second session of the impeachment against the former president, accusing him of being the “chief inciter” of the riots of January 6 and ruling out that it was an “innocent bystander.”

“The evidence will show you that former President Trump was not an innocent bystander,” said Raskin, for whom the former White House tenant “renounced his role as commander-in-chief and became the inciter-in-chief of a dangerous insurrection. “.

“He saw it on television as a ‘reality show’. He delighted with it,” said Raskin, for whom there was “method in madness that day” and in which Donald Trump “did nothing”, except “send tweets which only incited an unbridled crowd further. “

The second day of ‘impeachment’ against Donald Trump in the Senate has started as it began the previous day, with a video shown by the prosecution, a Democrat, although this time with “unpublished images” of the mob storming the offices and the interior of the Capitol facilities.

Raskin has also used his intervention to try to dismantle Donald Trump’s defense the day before, when his lawyers appealed to the First Amendment of the United States Constitution and freedom of expression.

“It’s more like a case where the city fire chief, who gets paid to put out fires, sends a crowd to set the theater on fire and when the fire alarms go off he does nothing but sit, encourage the crowd to continue their rampage and watch the fire spread on TV with glee and delight, “Raskin illustrated.

“You cannot go with the Police and support the thieves,” he insisted on this occasion, taking a quote from the conservative Supreme Court Justice Antonin Scalia, who died in 2016. “If he becomes the chief inciter of the insurrection, he cannot expect to be on the payroll as commander-in-chief of the union “he stressed again.

THE THREE MOST REPEATED PHRASES OF TRUMP ON THE EVE OF THE ATTACK
The Democratic representative for Colorado, Joe Neguse, another of those in charge of presenting the accusatory evidence against Trump, has shown a compilation of the three phrases that the former president repeated the most during the days before the assault on the Capitol, arguing that said rhetoric cheered his supporters.

“The words of President Trump in that speech on January 6, like the actions of the mob, were carefully chosen. Those words had a very specific meaning for that crowd,” he explained.

“I respectfully ask you to remember those three sentences as you consider the evidence today,” Neguse has asked the senators, before later giving a video in which one of the rioters on January 6 claimed to follow orders from former President Trump.

On Tuesday, the second impeachment trial that Trump faces in just a year began, with the approval of the constitutionality of the same with the support of up to six Republican congressmen, including Lisa Murkowski of Alaska, Susan Collins of Maine, Mitt Romney of Utah or Pat Toomey from Pennsylvania.

Despite the six Republicans who have voted in favor of the constitutionality of the ‘impeachment’, the number of 67 senators that Democrats need to, in effect, condemn former President Trump is still a long way off, since there should be 17 Republicans who they will vote in favor.

The riots left five dead, including a Capitol police officer. Two other officers died by suicide in the weeks after the violence. For these facts, the impeachment against Trump has been presented for a single article for incitement to insurrection.