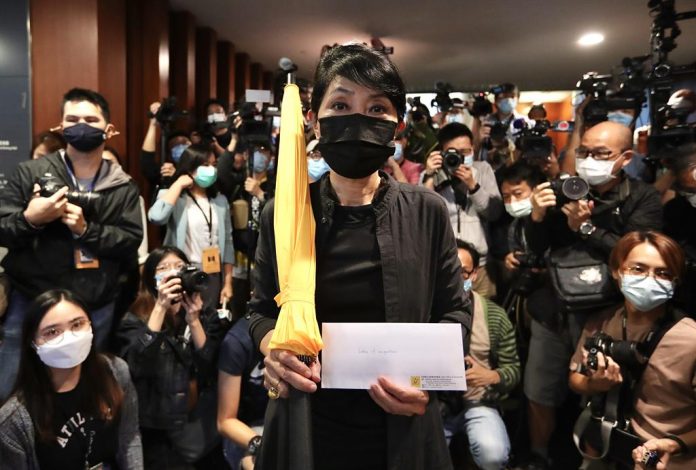 The Hong Kong government has described this Saturday the latest sanctions imposed by the United States against six officials in the territory for the repression against dissidents as “crazy, shameless and despicable.”

Among those affected is Tam Yiu Chung, the city’s liaison with the Chinese government, whose security law acted as a legal instrument of the Hong Kong authorities to detain 50 opposition activists earlier this month.

A spokesperson for the territory’s executive director, Carrie Lam, moved the Chinese government’s complaint against the United States for trying to intervene in China’s internal affairs and obstructing Hong Kong’s efforts to safeguard national security.

“The United States Government has taken advantage of all the incidents and excuses to make defamatory comments on the national security law and attack the authorities of China and Hong Kong in their obedient, faithful and proper application of the law,” according to the spokesman, in statements collected by the South China Morning Post.

“We cannot help but suspect that the national security law has touched a nerve with foreign or external forces,” the spokesman added. “It will not achieve its objective of implicit subjugation” against an administration that has an “honorable duty to prevent, stop and punish” acts that endanger national security.

SANCTIONS
Those sanctioned also include the Vice Chairman of the Main Central Group for Hong Kong and Macao Affairs, You Quan, the Deputy Director of the Office for National Security Protection in Hong Kong, Sun Wenqing, and three senior officials from the Security unit. Hong Kong National Police.

The US Secretary of State, Mike Pompeo, has called the measures imposed on Hong Kong, as well as the national security law, “appalling” and has asserted that the US government “condemns the actions of the Communist Party of China, which undermine the Hong Kong Freedoms and Democratic Processes “.

“We will continue to use all the tools at our disposal to bring those responsible to justice,” he said in a statement, after 50 people were arrested in Hong Kong on January 6, including the American lawyer John Clancey.

The Administration of the outgoing president, Donald Trump, has imposed a battery of sanctions in recent days against countries such as Iran, China, Russia and Venezuela despite the fact that Joe Biden will be sworn in on January 20.