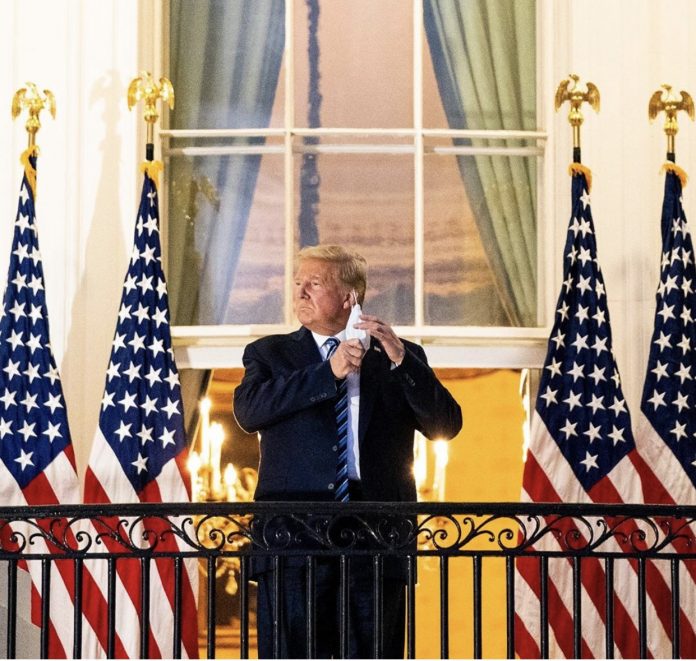 After landing on the South Lawn, Trump ascended stairs to a rarely used White House balcony above the Diplomatic Entrance, into which he typically walks. Trump then turned to face his helicopter — and the live television cameras — and removed his mask before giving the departing Marine One a long salute.

At a news conference on Monday afternoon, Trump’s physician, Dr. Sean P. Conley, said that the president had “met or exceeded all standard hospital discharge criteria,” but that he was not “out of the woods yet” in his fight against Covid-19.

“We’re looking to this weekend,” Dr. Conley said. “If we can get through to Monday, with him remaining the same or improving better yet, then we will all take that final deep sigh of relief.”

The president’s doctors also said that he had received a third dose of the antiviral drug remdesivir, and that he had continued to take dexamethasone, a steroid drug that has been shown to be beneficial to patients who are very sick with Covid-19.

Dr. Conley did not give a firm answer about whether Trump would be confined to his residence. The West Wing is experiencing a growing outbreak, with Trump’s press secretary, Kayleigh McEnany, joining the list on Monday of his close aides who have tested positive for the virus.

The doctors’ remarks came after Trump tweeted that he would be returning to the White House, which has its own medical suite. In doing so, as he has throughout the pandemic, he downplayed the seriousness of a virus that has killed more than 209,000 people in the United States, writing in his post: “Don’t be afraid of Covid. Don’t let it dominate your life.”