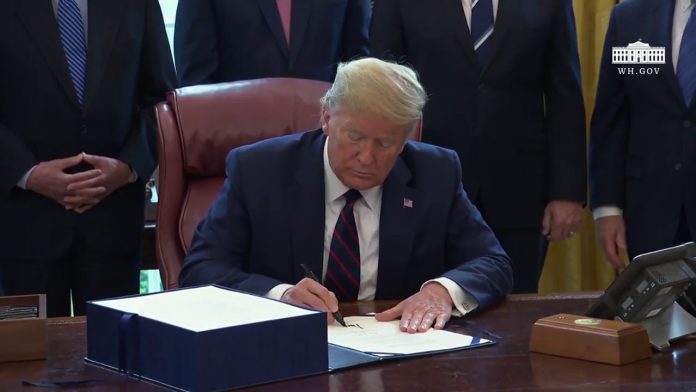 The President of the United States, Donald Trump, has stated this Wednesday that he will resume his trips next week visiting Arizona, after a month cloistered in the White House as a result of the coronavirus pandemic.

“I think I am going to Arizona next week and we are waiting for it. And I hope to go to Ohio very soon,” said Trump during a round table with business leaders, “The Hill” reported. Arizona is what is called a ‘swing state’ in the United States, those that move between Democrats and Republicans, key to the elections scheduled for November 3.

“We are going to start moving and hopefully in the not too distant future we will have some massive rallies and people will sit next to each other,” he added.

In this sense, Trump has been hopeful that he can resume the rallies for the general elections, in which he aspires to reelection on the Republican side, although he has acknowledged that it will depend on the speed with which the states lift the containment measures approved. to stop the coronavirus pandemic.

“I hope we can hold some 25,000-person rallies the old-fashioned way, where everyone goes crazy because they love our country,” he said.

The president’s travel has been limited in April as the coronavirus spread through the United States, the country most affected by the Covid-19 pandemic, which has already registered more than a million infections and the deaths exceed 60,000.

The last trip he made was to Virginia in late March, and since then he has been confined to the presidential residence. He also spent the first weekend in March at his Mar-a-Lago residence in Florida.

For his part, US Vice President Mike Pence resumed his travels last week and visited a factory in Wisconsin and the Mayo Clinic in Minnesota.