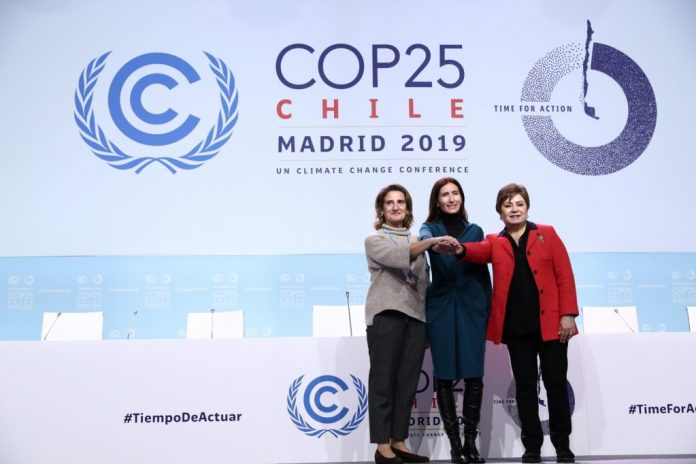 The leaders of fifty countries participating in the XXV World Climate Summit (COP25) have expressed their commitment to the objectives set out in the Paris Agreement to reduce CO2 emissions, while calling for “immediate action” for a green and sustainable transition, but “fair and equitable”. Likewise, the member states of the European Union have defended efforts to achieve climate neutrality in 2050.

Along these lines, the representatives who spoke at the first round table, chaired by the President of the Government in charge, Pedro Sánchez, who took place in the framework of the UN Multilateral Conference that began on Monday in Madrid .

During a meeting of more than two hours, the participants have agreed that “it is time to act” jointly “to” mitigate “and” combat the perverse effects “of climate change. So, in general, everyone has called action “immediate” in the face of “a matter that is survival.” “It is not an option, it is a necessity,” said the representative of Esuatini.

In the round table, each president has explained the national plans planned to move towards the objectives, to avoid “reaching the point of no return” and, thus, to address “the greatest challenge” of this generation. “No house is more shared than the planet and no cause is more common than this,” said the representative of Costa Rica.

From several developing countries, they have requested funding to achieve this green transition to be “fair and equitable.” “Despite our complaints, the famous green climate funds do not arrive,” denounced the representative of Honduras, highlighting “the serious injustice” suffered by this country, which barely emits pollutant gases internationally, while among the ” first three countries most affected as a result of climate change. “

For his part, the Prime Minister of Greece, Kyriakos Mitsotakis, has focused on the impact that climate change has on “the irreplaceable” cultural heritage, in addition to causing natural disasters such as floods or droughts.

THE PRESIDENT OF AUSTRIA AND HIS POLAR BEAR OF PELUCHE
A small polar teddy bear that the President of Austria, Alexander Van der Bellen, has also become the protagonist of the dialogue. The Austrian leader explained that he was recently visited by a 6-year-old boy named David and that seeing so many crystal chandeliers and how much electricity was consumed in the Vienna Palace, he said: “Polar bears are going to die.” Van der Bellen has told this anecdote to ask that children like David and at the same time his children, can live in a world of renewable energies, greener.

For his part, the French Prime Minister, Edouard Philippe, recalled when he was little it was thought that acid rain was going to end the forests. “But governments reacted, it was reversed and acid rain ceased to be a recurring theme and did not disappear miraculously but was the result of serious work,” he said.

Some leaders have also warned that history will be the one that “judges” the actions that are carried out now, such as the prime minister of the Cook Islands or the head of the Government of Andorra, Xavier Spot. Meanwhile, the Vatican Secretary of State, Pietro Parolin, has reflected on “if there is political will to have more human, financial and technological resources to mitigate climate change and poverty.”

Among the measures that the leaders of the different countries have shared during the meeting, the following stand out: making heating production more efficient – in the case of Andorra -; the closure of coal-fired power plants – as the French leader has pointed out -; make free public transport – in the case of Luxembourg -; eliminate single-use plastics – as Alberto de Monaco has emphasized -; or take advantage of what the oceans offer, according to Erna Solberg, Prime Minister of Norway. What is clear, for the Belgian Prime Minister, Sophie Wilmès, is that “this goes beyond borders, cultures and ideologies” for what she has called to be “ambitious” and a “collective commitment”.

The meeting has concluded with a reference to young people who meet every week to demand political leaders to carry out actions in defense of the planet. “Beyond these four walls, there are many young people who meet every week demanding that leaders tell the truth, that they are experiencing the climatic emergency and that we put all possible means to inherit a much fairer and more sustainable planet. Let’s all work together to achieve it, “Pedro Sánchez has encouraged.