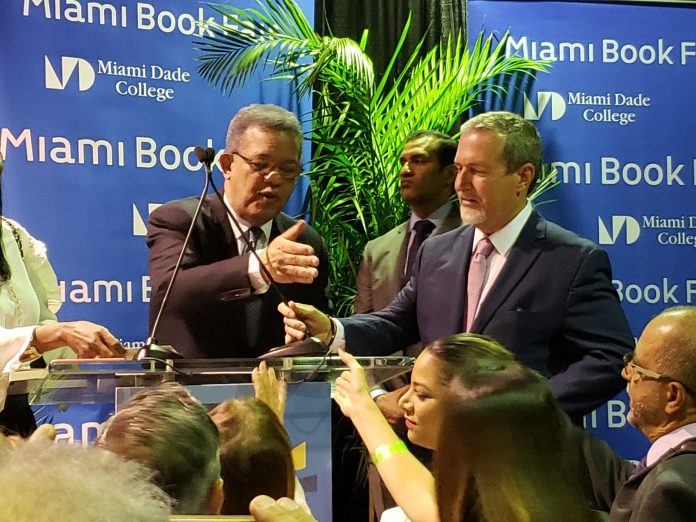 Dr. Leonel Fernández is the pride of the Dominican Diaspora. At just 9 years old, he emigrated to New York City where he began to forge studies at PS 75 Emily Dickinson Elementary School and later at Louis Brandais High School.

That academic knowledge was further expanded, while reading tirelessly in the Bloomingdales Public Library and on the front steps of the Sans Souci building, located at the corner of 95th Street and Amsterdam Avenue in Manhattan (where he resided). And without forgetting that during that sessions of
Particular readings were accompanied with a piece of pizza!

All those years of training and experiences in New York City have accompanied Dr. Fernández all his life. So much so that when you travel to the Big Apple, you often visit the neighborhood frequently. I’ve heard him say: “it all started there”.

He returns to the Dominican Republic in 1968 to begin his university studies. Although, he always traveled to that great city during the holiday season to visit his mother, Yolanda.

one
Already being incorporated into the daily life of the Barrio Villa Juana, located in the central part of the Dominican capital, the destination had prepared a great surprise, to meet one of the political leaders most admired by the Dominican people in its history, the Professor Juan Bosch, who became his political reference point, to this day.

At the beginning of the 90s, on a visit to the city of Miami, it is where Dr. Fernández is predicted, affirmatively, that he would one day be President of the Dominican Republic. This forecast became a reality at the age of 42, in May 1996. Afterwards, it is repeated again in 2004 and successively in 2008.

Dr. Fernández has never forgotten his roots in the Dominican Diaspora, as well as his needs, based on his own experiences.

During their governments, the following initiatives were carried out for the benefit of Dominicans abroad:

-. The double nationality was included in the constitution of the Dominican Republic, so that all the children of Dominicans born abroad have the possibility of obtaining Dominican nationality.

-. The creation of the Advisory Councils (now the Institute of Dominicans Abroad – INDEX).

2
-. The ability for Dominicans to vote abroad and be represented in the National Congress.

-. He named hundreds of Dominicans of the diaspora in diplomatic headquarters.

-. Also, during their governments, mechanisms were established to facilitate procedures and eliminate bureaucracy regarding the diaspora and government efforts.

Dr. Leonel Fernández has been out of power since 2012. The strength of the Dominican people has shown strongly the wishes to guide us again on the country’s paths from the coming year.

But before reaching the elections of May 2020, some primaries are being held this Sunday, October 6 to elect in this particular case, the candidate that will represent the Dominican Liberation Party (PLD) in that presidential electoral contest .

The Central Electoral Board determined that it did not have sufficient funds so that Dominicans and Dominicans, residing abroad, could vote. According to them, they did not have the necessary funds.

3
So, how can the Dominican diaspora influence so that Dr. Fernández returns to power? Urging their relatives and resident friends to vote massively this coming Sunday in favor of Dr. Leonel Fernández.

Pride of the Dominican diaspora!