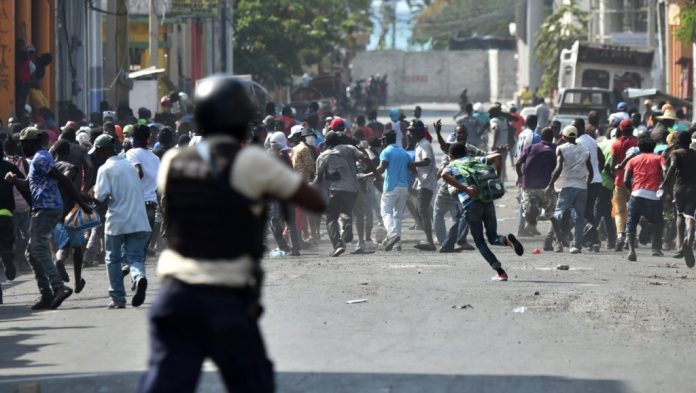 The Haitian National Police (PNH) has used tear gas to disperse protests against the economic crisis and corruption cases in the country.

During the day on Friday several acts of looting and violence have been carried out in Port-au-Prince and in several cities in Haiti, in which thousands of people have demonstrated against the president, Jovenel Moise, as reported by the news agency AlterPress

Thousands of people have demonstrated against the management of the country’s president forming a great human tide. Most people were armed with stones, sticks, and even machetes and axes.

A branch of the Western Union transfer company has been ransacked and destroyed by protesters, as well as a computer equipment store. On the other hand, protesters have caused a fire in the city of Pétionville, as reported by several local media.

In the municipality of Carrefour (south of the capital), a group of protesters has threatened to set fire to a public market. The merchants, who took care of their businesses during the mobilization against Moise, have been forced to close their premises.

In addition, in the city of Jacmel, in the southeast of the capital, there have been clashes between protesters and police officers, who have used tear gas to disperse the crowd of protesters.

Tensions have increased in the country after a photojournalist was injured on Monday after a senator from the government party fired his pistol to disperse protesters who had gathered on Monday around his vehicle near Parliament’s headquarters, in Port-au-Prince.

Senator Jean Marie Ralph Fethiere came out of a white van near the parliamentary headquarters after several protesters forced and managed to open one of the doors of the vehicle while shouting against the parliamentarian, according to images recorded by Reuters.

Fethiere, dressed in a black jacket and jeans, then pulled out a gun and fired several shots, causing the protesters around him to run away. After the shooting, the senator got back into the van and left the parking lot.

As a result of the incident, the photographer of the Associated Press (AP) news agency Dieu-Nalio Chery was injured in the jaw and had to be intervened to extract what could be a fragment of a bullet, as reported by the American media, which He said the photojournalist will recover.

International media have indicated that a security guard was also injured although his state of health is unknown. Asked about the incident, Senator Fethiere has told Radio Mega that he acted in self-defense.

A dispute between energy trading companies in the United States and Haiti has caused several blackouts and fuel shortages in the Caribbean country, which has led to increased population discontent with the Moise government.

Haiti relies on fuel shipments from Venezuela, which offers financing in optimal conditions for several Caribbean countries to buy their gasoline, diesel and other products under the Petrocaribe program.

However, this scheme collapsed in 2018 due to the crisis in Venezuela, which has led Haiti to have to return to international markets and with a rise in fuel prices.