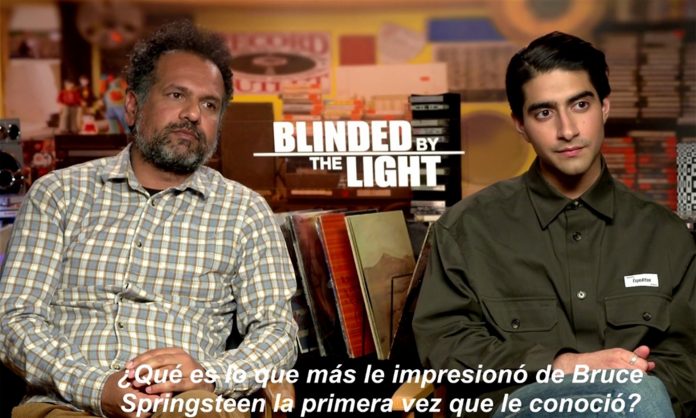 Viveik Kalra stars in the movie Blinded by the light, an inspiring drama whose backdrop is the music and lyrics of Bruce Springsteen’s songs. This musical, directed by Gurinder Chadha, opens in Spain this Friday, September 20.

For Viveik Kalra, the experience of starring in his first film was “crazy.” “I auditioned three times. Three auditions later, I was on a set. It was very intimidating, but I didn’t feel much pressure,” says the young performer.

The film is based on Greetings from Bury Park, the memoirs of journalist Sarfraz Manzoor. Sarfraz confesses that he never imagined that his life would end on the big screen. “For me, the most wonderful thing is to write something and tell a story that is very personal, that connects with other people. And make a story about my parents … Their difficulties are shown in the movie, and that to me is very significant “says the writer.

Bruce Springsteen is the reason why Gurinder Chadha decided to make Blinded by the light, while actor Aaron Phagura is very clear about the most powerful message in history. “The relationship between a father and his son,” he says.

FAMILY AND HOPE
Blinded by the Light tells the story of Javed (Viveik Kalra), a British teenager of Pakistani descent, who lives in the English city of Luton in 1987. Amid the racial and economic turmoil of the time, Javed writes poetry as a means to escape the intolerance of his hometown and the inflexibility of a traditional father.

But when a classmate unveils the music of ‘The Boss’, Javed sees parallels between his life as a working-class boy and the powerful lyrics of Bruce Springsteen. This is how Javed discovers a cathartic exit for his repressed dreams and builds courage to start expressing himself with his own voice.

The film a fun story about courage, love, hope, family and the ability of music to inspire the human spirit. Chadha directs and produces the film, which is written by Manzoor, Chadha and Paul Mayeda Berges. The story is based on the music and poetic lyrics of Springsteen, who gave his approval to Chadha since the beginning of the film.