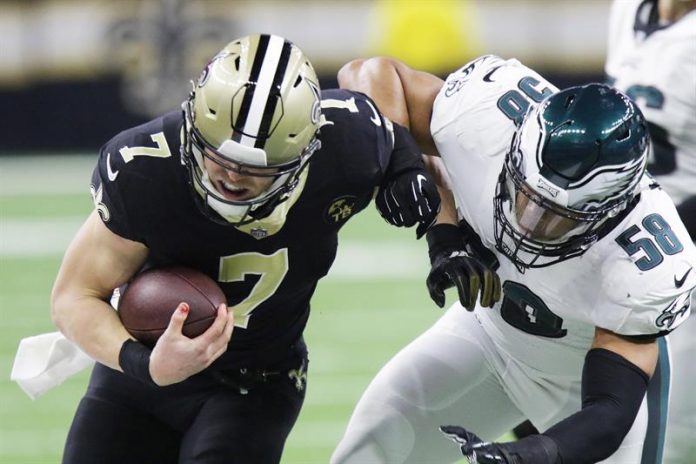 There were no surprises, but a comeback and exhibition of the New Orleans Saints and the New England Patriots, on the way to today’s ticket to the National Conference (NFC) and American (AFC) final of the Division Series playoffs. the National Football League (NFL).

The Saints rallied from a 14-point deficit for the first time so far this season and beat the Philadelphia Eagles 20-14 in the NFC.

The victory allows the Saints to return to the final of the NFC to play next Sunday against the Los Angeles Rams, who won by 30-22 to the Dallas Cowboys, in the first game of the series played on Saturday.

The Saints last reached the NFC Final in 2009 when they won the Super Bowl title.

The New Orleans team, which had quarterback Drew Brees and wide receiver Michael Thomas as the big names in their offense, ended the Eagles’ presence in the playoffs, where they defended the title of past Super Bowl LII champions. .

The Eageles (10-8) with their defeat will no longer be able to repeat as NFL champions. No team has done it since the Patriots got it in 2004.

The New Orleans team will have the field advantage for Sunday’s game when they face the Rams, whom they already won in Week 9 of the regular season 45-35.

The Saints in the deciding match got something they had not achieved throughout the regular season, as was overcoming an adverse score of 0-14 in the first half against the Super Bowl champions.

But both Brees and Thomas and all the defense recovered from adversity and in the end demonstrated on the grid of the Mercedes-Benz Superdome to be a better team than the Eagles.

Thomas was for the Saints a true superhero, who set new team records in receptions (12) and receiving yards (171), in addition to getting the “touchdowns” that gave the New Orleans team the partial advantage of 16-14 that they would not lose anymore.

Brees finished the game with 28 completed shipments of the 38 he made for 301 yards, two were scoring, and another was intercepted.

Rookie running back Sony Michel scored 129 yards on the ground and scored three times for the Patriots, who beat the Los Angeles Chargers 41-28 in the AFC division game.

With their victory, the Patriots won their eighth consecutive trip to the AFC championship game and are presented as favorites when they face the Kansas City Chiefs in the final, who yesterday, Saturday, beat the Colts 31-13 of Indianapolis.

The Patriots (12-5) and the Chiefs (12-4) will face off next Sunday at the Arrowhead Stadium in Kansas City, with the Kansas team having the best record during the regular season.

The game will be a rematch after the Patriots defeated the Chiefs 43-40 at Foxborough in the Sixth Week of the regular championship.

The Patriots will play the 13th edition in an AFC championship game during the era of quarterback Tom Brady and head coach Bill Belichick.

For the New England team it was his 35th victory in the postseason game and they tied the Cowboys in that section.

Both teams are behind only the Pittsburgh Steelers, who add 36, and this season they were out of the playoffs.

The Patriots got their 15th trip to a conference match and tied the San Francisco 49ers in second place of all time, leaving both behind the Steelers, who add up to 16.

While his eighth consecutive trip to the AFC game continues to expand the league mark in that line they have.

Michel, 23, imposed the rhythm of the Patriots’ offensive game by scoring one and 14 yards in the first quarter, which left the game virtually ruled out.

The Patriots runner, who was selected last summer in the college draw with the number 31 in the first round, made 24 carries for 129 yards, the longest was 40 yards and broke the Chargers’ defense at all times. .

While the aerial offensive directed it perfectly once again Brady, who understood that he showed his entire class by completing 34 of 44 submissions for 343 yards, including the only one he made of touchdown.

The Chargers (13-5) have not reached the title game of the American Conference since the 2007 season.

His quarterback, veteran Philip Rivers completed 25 of 51 passes for 331 yards, three touchdowns and one interception and could not