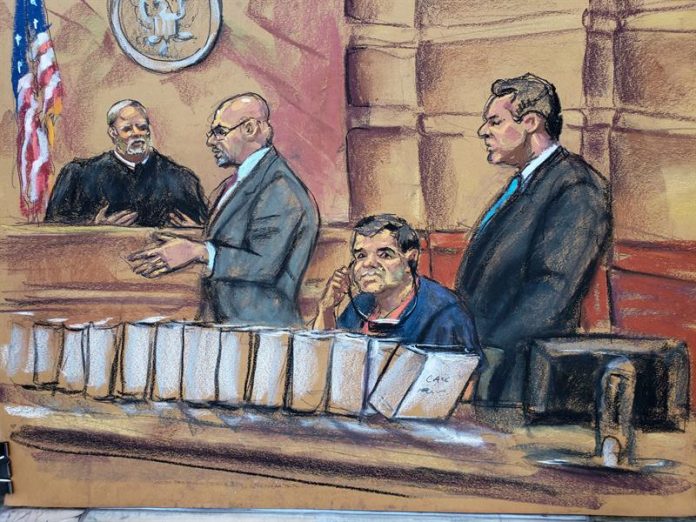 Seven women and five men will definitely compose the jury that will evaluate the evidence in the trial against Joaquín “El Chapo” Guzmán, accused in a New York court of drug trafficking and of maintaining a criminal enterprise that exported tons of drugs to the United States for two decades. UU

Four women and two men were also chosen as alternate juries for this process, which monopolizes international attention and will enter into the substance of the matter as of November 13.

Among the members of the jury, whose ages range between 20 and 50 years, there are immigrants from Poland, Ethiopia and Asia, as well as four people who speak Spanish – a substitute also speaks it -, and from today they are partially isolated and, between strong security measures, with order of the judge not to speak of the trial.

The jury was selected after two long days of intense questioning of 75 people from different backgrounds by Judge Brian Cogan who presides over the case, the defense and the prosecution, and today in a third session the group of people who will decide will be definitively closed. the future of one of the most dangerous drug lords in the world, for which the Prosecutor’s Office asks for life imprisonment.

The juries and alternates, who left the room of Judge Brian Cogan who presides over the case and where the selection was carried out escorted by a federal sheriff, will be sworn in next Tuesday prior to the start of the expected, expensive and mediatic trial.

Cogan decided not to take an oath until next week, worried that someone might regret it and, if that happens, he needs time to choose another one among the six substitutes.

After the selection of the jury, the judge informed the defense of Guzmán Loera that one of the chosen women, a Hispanic woman, had expressed to him in private and in tears his fear that people might discover that he is a jury.

“We have a small rebellion,” Cogan told lawyers Jeffrey Lichtman and Eduardo Balarezo, who defend the 61-year-old Mexican who faces life in prison after being extradited to the United States. about two years ago

Lichtman responded that the concern of the defense is that if they let one of the jurors go “by a few tears, then we will have a sea of ​​tears” during the trial.

The jury was selected with the presence of Guzmán Loera, who during this process came together with dark trousers and jacket instead of the uniform of the federal prison in which he is since his extradition.

Rules of the court prevent juries from seeing the accused in prison clothes so they do not see him as a criminal.

During this trial the name of the jurors will not be known, where they live or work, as part of the extreme security measures due to the violent history of the Sinaloa cartel, which has kidnapped, tortured and murdered those who represent a threat, according to the accusation against the Mexican.

In general, the majority said during the interview process, in which they were identified by a number, to have heard about Guzmán through news programs or series, and there are some that are related or have relatives related to law enforcement agencies.

A middle-aged white woman said she had two siblings in the Department of Homeland Security, one of them a pilot, but said she could be objective when she hears the testimony about Chapo from agents of that agency.

Another, African-American, also middle-aged and with a sister in the Department of Prisons, commented during the previous interviews that she had seen something on the news about the daughters of Guzmán Loera.

The defendant has seven-year-old twins with Emma Coronel, who has attended pretrial hearings and recently celebrated an expensive birthday inspired by the famous Barbie doll, which was reviewed by the press.

Another of those who will judge the evidence against Guzmán Loera said he saw four episodes of the Narcos series and when asked what he remembered, he said that “to be honest, the DEA agent was very handsome.”

The Polish immigrant had pointed out that her son had problems with drugs several years ago but assured the judge, prosecutors and defense that he will not let that affect him to evaluate the evidence presented during the trial.

A young African-American woman said that the name of Chapo and the Sinaloa sign sounded familiar but she does not remember where she heard from them.

Another young man said that he had heard that El Chapo “escaped from Mexico, after that he was captured and brought to the US,” and said that despite being attacked several years ago by a group of young people, that It will affect you as a jury.

With the selection of the jury, starting on Tuesday, Guzmán Loera, to whom the US Government has managed to bring to the bench of the accused, the prosecution will present thousands of pages of documents, recordings, photographs and a long list of witnesses to prove their allegations of drug trafficking, while the defense will try to prove that their client is not the boss they claim is .