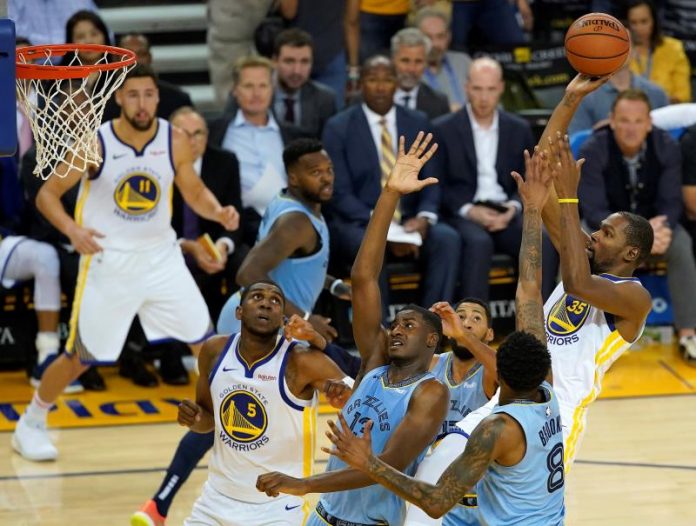 The Canadian base Jamal Murray emerged as the figurehead of the day of the NBA to score 48 points that left him leader of the Denver Nuggets, who along with the Golden State Warriors, maintained their winning streak and are the two best teams of the Western Conference.

The Celtics took an 18-point lead in the first quarter, but Denver quickly recovered thanks to Murray, who scored 23 points in the first half.

The Celtics (6-4), who were led by the base Kyrie Irving, who finished the game with 31 points, suffered the second consecutive loss.

The one that the Warriors do not know that they had to the escort Klay Thompson like leading encestador that contributed 27 points, the forward Kevin Durant obtained other 22, six rebounds and as many assists, that allowed them to gain 117-101 to the Grizzlies of Memphis.

The game was decided in the third period when the Warriors managed a partial 34-15 and the base Stephen Curry, who did not start well, eventually reached the 19 points. Golden State has the best record in the NBA (10-1).

It is also the second best start to the season in the history of the franchise, behind the team three years ago who did it with a 24-0 record.

The Philadelphia Warriors of the 1960-1961 started with 9-0 and then conceded four straight losses.

Guard-forward reserve Dillon Brooks scored 11 of his 18 goals in the first quarter and was the leading scorer of the Grizzlies (5-4), who lost games on consecutive nights of competition.

The Oklahoma City Thunder also won by winning 122-116 over the New Orleans Pelicans, who lost the sixth straight game after starting the season with a 4-0 record.

But, the Thunder (5-4), who have a 5-0 run after starting the league with 0-4 under their belt, suffered again the loss of star base Russell Westbrook, injured 4:25 minutes from the end of the third period with a sprained left ankle.

Westbrook finished with 17 points, nine assists and seven rebounds before getting injured and Thunder coach Bill Donovan said the first X-ray exams had been negative, but they would not know exactly the extent of the injury to their star base. until Tuesday afternoon.

The star guard James Harden, with 28 points, was again decisive in the Houston Rockets attack, who also recovered their best defensive game, and won at home by 94-98 to the Indiana Pacers.

The Swiss center Clint Capela with a double-double of 18 points and 10 rebounds was also decisive in the recovery of the defensive game of the Rockets (4-5), who achieved the third consecutive win after having lost four in a row.

The guard Victor Oladipo with 28 points, including four triples of 11 attempts, remained as the leader of the Pacers (7-4), who in the end could not avoid the defeat that cut them streak of three consecutive wins.

Base Kyle Lowry provided a double-double of 17 points and 11 assists as the attack leader for the Toronto Raptors who won 111-124 away against the Utah Jazz, who suffered the fourth straight loss.

The duel lost many points because the escort Donovan Mitchell was absent by Utah as a result of a sprained left ankle, while Toronto played without Kawhi Leonard for a pain in that same joint.

Forward Josh Richardson returned to be the leader of the Miami Heat’s decimated attack by earning 27 points that helped his team win extra-time visitors 115-120 to the Detroit Pistons, who suffered the fifth straight loss.

The guard Zach LaVine set the best mark of his career with 41 points, including the decisive free throw 0.2 seconds from the end of the second overtime, in the duel that the Chicago Bulls won at home by 115-116 to the New York Knicks .

French forward Evan Fournier scored a basket before the final whistle sounded and the Orlando Magic completed a nine-point comeback in the fourth quarter to prevail 102-100 to the Cleveland Cavaliers in a duel of losing teams.