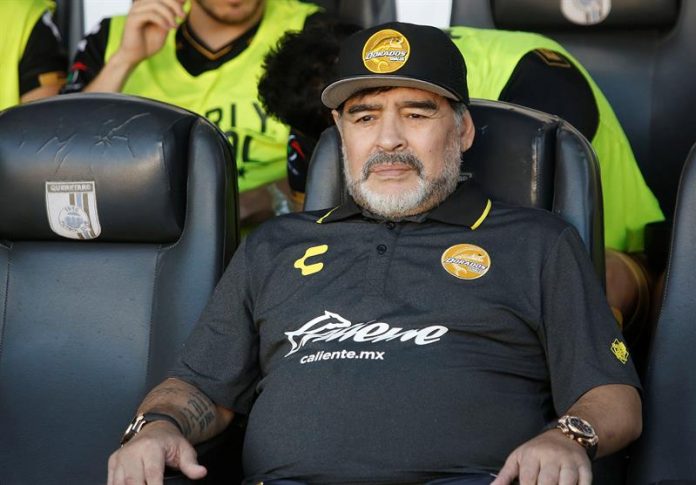 Diego Armando Maradona meets this Tuesday 58 years and many teams and footballers have congratulated him for his anniversary, as well as in his country have made the Argentine team, with which he was world champion in 1986, and the Club Atlético Boca Juniors, among others.

“Happy birthday, Diego!” Was the message that Boca Juniors left on their social networks accompanied by the “#HistoriaXeneize” label and a photograph of the ex-football player in his time of blue and gold, while the Argentine Football Association (AFA) ) wished him congratulations and remembered that World Cup of Mexico ’86 in which Maradona was consecrated.

Maradona, the current coach of Dorados de Sinaloa in Mexico, celebrates his fifty-eighth birthday in the Aztec country, while in Argentina the #FelizCumpleDiego label became the first Twitter trend in the early morning hours.

“Happy birthday, it’s so hard not to be able to hug you on this day, it’s so hard not being able to sit next to you … I would give my life so I could always see you happy, in every moment of your life!” said in his social network his son Diego Maradona Jr., whom the former player publicly acknowledged as his son in 2016.

Barcelona and Napoli, teams where he stood out, and Belarusian Brest Dinamo, who Maradona presides, wished him to enjoy the day.

Since Argentine football he received greetings from several clubs, such as Newell’s Old Boys, whose official account wrote “I only know that I saw you with the red and black”, in reference to the season that ‘El Diego’ played there in 1993.

Former players like the Argentines Ubaldo ‘el Pato’ Fillol and Juan Pablo Sorín were others who paid tribute to him.

“I really enjoyed you as a teammate and I suffered as a rival.” It was a real pleasure, “Fillol said in his account, while Sorín posted the video of his second goal against England in the quarterfinals of the ’86 World Cup, to which the ex-midfielder of River Plate and Villarreal, which emerged from Argentinos Juniors, as Maradona, was referred to as “the best goal in the history of the world”.