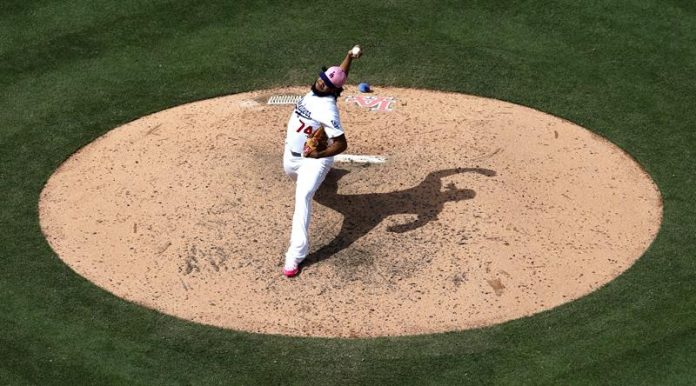 The St. Louis Cardinals maintained one more day their winning streak in the National League baseball competition and enter fully into the fight for the title of the Central Division.

Dodgers Curacao closer Kenley Jansen allowed homers by Jedd Gyorko and Matt Carpenter in the ninth inning to return to the team after suffering an irregular heartbeat and the Cardinals won at home 3-5 to the Los Angeles Dodgers.

Gyorko, who came on the plate as a pinch hitter, opened the episode by sending a 1-1 pitch to center field.

Carpenter followed with his thirty-fourth homer in so far this season, the best record of the Old Circuit, which also went to the center, surprising the few fans who endured after more than four hours of play.

Curazolean Jansen (0-4), who took the loss, retired the next two batters he faced before conceding a single against Marcell Ozuna. He struck out popup Tyler O’Neill to close the inning, but the damage was done.

The return of Jansen was highly anticipated since during his absence the bullpen of the Dodgers had a 5.17 ERA. The player was hospitalized on August 9 after an irregular heartbeat was detected and his discharge was expected to last a month, but earlier in the day he was discharged by a cardiologist.

Reliever Brett Cecil (1-1) scored the win after throwing a third inning in which only gave a passport. San Luis closer Bud Norris gave Matt Kemp a ticket at the start of the last inning before taking the last three outs from the game that left him with the twenty-fifth save.

For the Cardinals, who are 68-57 and are third in the Central Division, three and a half games away from the Chicago Cubs, leaders, the Venezuelan Jose Martinez went 5-2, with two runs and two RBIs.

Travis Shaw and Christian Yelich each hit home runs, Chase Anderson calmed down after allowing two solo homers, and the Milwaukee Brewers came back to beat the Cincinnati Reds 5-2.

The fly-by of Shaw produced a pair of runs against Homer Bailey for the Brewers to take the lead 3-2 in the sixth.

The Venezuelan Jesus Aguilar connected a single in the beginning of the episode and Shaw followed with his twenty-fifth homerun, after finding a ball with a 0-2 score and deposit it in the seats of the right field.

Anderson (8-7), who pitched with seven days off, started the day tied at the undesirable top of the National League with 24 allowed homers.
In the second chapter, he received home runs from Venezuelan Eugenio Suárez and Phillip Ervin, for the Reds to take the lead by 0-2.

However, Anderson retired his last 14 rivals. He allowed two hits in six innings, with six strikeouts and no walks.

Josh Hader retired six batters in a row, three by way of the punch, while Jeremy Jeffress solved the ninth and was credited with his fifth rescue.
Bailey (1-11) quashed the Brewers until the fifth act, when he tolerated a solo homer by Yelich, who hit 20 homers so far this season.

Bryse Wilson worked five innings effectively and became the third 20-year pitcher to open a game this season in his debut with the Atlanta Braves, who beat the Pittsburgh Pirates 1-0.

The Braves, leaders of the Eastern Division of the Old Circuit, ended a four-game losing streak.

Atlanta acquired the right-of-Wilson deal (1-0) to the Gwinnett Triple-A team before the game, in order to give rest to their regular starters.

Mike Soroka was 20 years old on May 1, when he opened the game against the Mets in New York, and Koby Allard was the same age on July 31, in a match against the Miami Marlins.

The last team to call on three under 21 players in the same season were the Kansas City Athletics, who in 1965 employed Catfish Hunter, Don Bushchorn and Ron Tompkins.

Five relievers finished the work of seven hits. Dan Winkler solved the ninth inning and scored his second save despite allowing a single without outs.

Pittsburgh has allowed a run in each of its last five games, but has lost three, something that did not happen in the organization from the period between July 13 and 18, 1888, when he called himself the Alleghenys.

Starter Chris Archer (4-6) charged with the loss and was retired after four innings for a discomfort in his left leg.

A ball from Brandon Crawford, which seemed ideal to end the thirteenth episode, ended up falling when left fielder Dominic Smith interfered with the catcher of Dominican shortstop Amed Rosario, and the San Francisco Giants beat the Mets 1-2 at home.

The Giants had runners on the corners with two outs, when Crawford hit his short high. Rosario took a few steps back to put herself in left field, made Smith a signal to move away, and positioned herself in order to make a routine catch. Smith, who plays most often in the initial, came running and collided with Rosary beads.

The ball fell from the glove of the Dominican, and Andrew McCutchen scored thanks to the error marked Smith The Giants cut a streak of four consecutive defeats. Derek Law (1-0) resolved two innings without conceding to win the victory against Tyler Bashlor (0-2), which took the defeat.