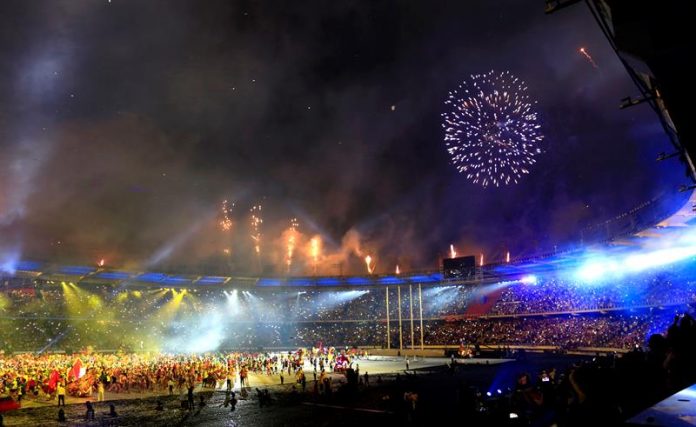 The Central American fire, which united 5,339 athletes from 37 countries and territories for 16 days, went off today in Barranquilla in the midst of a party alluding to the carnival of the city and nostalgia for the end of an event in which the gene reigned of the joy that infected our own and strangers.

With the flame still lit, the closing ceremony of the XXIII Central American and Caribbean Games began, which left Mexico champion for the eleventh time.

A sample of the Magdalena River and what it means for the city was the opening act of the closing ceremony, in which the best moments of these games could also be seen through a giant screen.

Then the infants of the Naval School of Suboficiales de Barranquilla entered the field of the Metropolitan Stadium Roberto Meléndez with the flags of the 37 countries, while the athletes who were still in the city paraded and who walked and danced all together, as a single family .

A video that exalted the 5 thousand volunteers who were part of the sports party and the athletes thanking their work, was the most emotional of the night, as well as the entrance to the scene of 1,500 of these tireless collaborators accompanied by Baqui, the symbol of the jousts.

The mayor of Barranquilla, Alejandro Char, took the floor after the protocol hymns: “I am very happy and proud of all the Barranquilleros for the beautiful party that we produced for the world, happy for this responsibility that the Odecabe gave us.” Barranquilla did the homework how I had to do it. “

“Today, more than ever, Barranquilla has shown the world that nothing is too big for them, we promised that they would be the best Central Americans and that’s how it was,” said Char amid applause.

Then the president of the Central American and Caribbean Sports Organization, Steve Stoute, officially announced the closure, but not before congratulating Colombia.

“We arrived at the end of these fantastic games and tonight I do not want to say goodbye, because the people of Barranquilla, Cali, Bogota, will live with us forever, their kindness, their smile, their hospitality, their affection, will be in our hearts for a long time and we will never forget them, “said the leader.

“Many hours of work, fantastic facilities, more than 100 broken brands, more than 5,000 athletes … Never before have so many countries come to the games, the largest television and streaming audience, all this leads me to say that These have been the best games in our history, thank you Barranquilla for making this a reality! “Stoute concluded.

The ceremony continued with the delivery of the flag made by Stoute to the mayor of Panama City, José Blandón, who thanked the Odecabe for trusting his country to organize the joust of 2022.

“We have a great commitment because Barranquilla put us very high, we want to play games as good as these, Panama is preparing to welcome them in 2022 with open arms, we hope,” said Blandón.

The Central American flame went out and with fireworks and a promotional video from Panama welcomed the games of 2022.

On the stage a cultural show of the Folkloric Ballet of Panama took the show for more than twenty minutes. Later, a dancer picked up a vueltiao hat, typical of the Colombian Caribbean region, while waving the Panamanian flag.

And the party continued in the midst of lights, fireworks and dancing with the scenic proposal of the carnival with an ensemble of comparsas, floats and a countless number of choreographies that once again showed the main export product of Barranquilla, joy.

The queen of the carnival, Valeria Abuchaibe, directed the different dances and a mini Battle of Flowers, the main event of the Barranquilla festival, took the Metropolitan.

At the end of the carnival act the attendees enjoyed the songs of the Colombian Vallenata music artist Silvestre Dangond, and Barranquilla said goodbye to these jousts 72 years after organizing them for the first time in 1946.

The fire was extinguished, but joy is still burning here. Claudia Aguilar Ramírez.