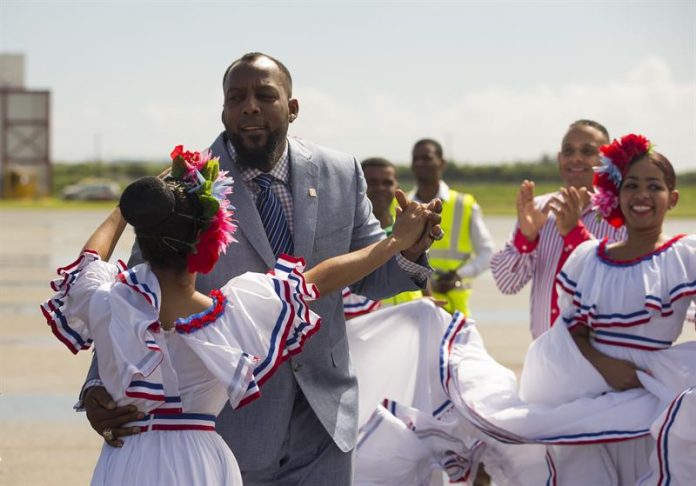 Once again the great quality of which the expelotero Dominican Vladimir Guerrero always showed was the humility as a person and that same one returned to be protagonist with the arrival in Cooperstown of the relatives and friends who will accompany him when Sunday is exalted to the Hall of Fame.

All the people who will live together with Guerrero for such a special moment were today in the main street of Cooperstown and reaffirmed their human quality, which transcended from the pure sports field.

“There are no words to describe the humility that Vladimir Guerrero has,” said Michael Martinez, one of Guerrero’s many compatriots who will accompany him this weekend. “The way I see that he has with his relatives is unique. (Also) with friends, his friends, relatives, his behavior equal for all.”

That personality was the same he had when he was in the field and used his talent with the attitude that he should work at all times and do it with the humility that every day had to overcome, not depend on what he had done in the previous day.

Thus, at the end of his 16-year career, he reached the 449 home runs, 1,496 RBIs, a career-best average of .318 and a .931 OPS at the Major League level.
The above speaks for itself about what Guerrero’s trajectory has been in the baseball diamond and is now awarded with a plaque in the Hall of Fame.

Outside the field, the native of Don Gregorio, Nizao has always been known to stay close to his roots and not let “fumes go to his head,” be respectful to everyone and take his country in his heart and with the flag high of all the great values ​​that the Dominican people possess.

The general feeling within the procession that accompanies Guerrero is that he is a person “super grateful” and very proud to be one of the best Dominican players who have been in the Major Leagues.

That has also led him to be an excellent person with his Dominican people and especially with the people of his town, Don Gregorio, whose residents are also exultant to have in Guerrero a new member of the Hall of Fame, which has made them transcend in the best baseball in the world as is the Major League.

The best reflection of his humility and affection towards his people is that he lives in the same town where he was born, surrounds himself with the same people who always surrounded him since he was in the minor leagues.

But the most important of all, that defined his greatness as a person, is that he is always looking for the most needy people, helping people who require it.

It’s true that Guerrero never distinguished himself in his professional career with the Montreal Expos, Anaheim Angels / Los Angeles Angels, Texas Rangers and Baltimore Orioles for talking to journalists, it was not his strength to express himself, but even in that facet has been known to overcome, something that has also been recognized by experts to give support at the time of being elected to the Hall of Fame.

In addition, starting on Sunday, he will also have the opportunity to become the first Dominican position player to reach the Hall of Fame, where his compatriots, the legendary pitchers, Juan Marichal and Pedro Martínez are already.

Without distinction, active Dominican players and those who are already retired have been unanimous in praising the figure of Guerrero and having known, coming from below being able to reach the highest you can dream of in baseball. career.

All also agree in pointing out that as a player, when he had the bat in his hands, simply, was unique in the way he faced rival pitchers.

That’s why Guerrero is given all the recognition of being a unique athlete, who went with any pitching. I had no area; easier they worked with a ball in the middle than with a ball on the floor.