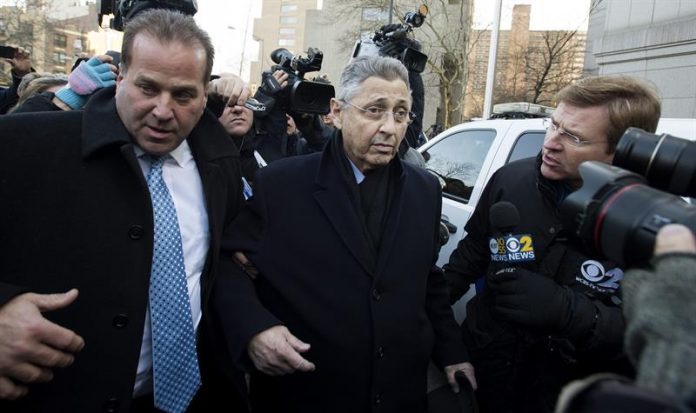 The former president of the New York State Assembly Sheldon Silver, who for more than two decades was one of the most powerful politicians in the state, was sentenced today to serve seven years in prison, after a jury, in a second trial, declare guilty again of corruption.

The former Democratic leader, 74, was accused of having obtained about four million dollars in illegal payments in exchange for taking different official actions to benefit a cancer researcher at Columbia University and two real estate developers in New York.

On May 11, Silver was found guilty for the second time after a trial that lasted two weeks in federal court for the Southern District of New York, in Manhattan.

According to the prosecution, Silver hid the income by making them go through the fruit of his part-time job as a jurist.

The once-powerful lawmaker and lawyer, who spent more than two decades in the state legislature, had already been sentenced to twelve years in prison after being found guilty during the first trial on the same charges in 2016.

However, he did not serve time after the Second Circuit Court of Appeals in Manhattan overturned his conviction, based on a ruling by the Supreme Court of the country over former Virginia Governor Robert McDonnell.

That ruling reduced what could be defined as an “official act” under federal corruption laws, and that’s why the Court of Appeals found that the jury that convicted Silver received “wrong” instructions.

“Silver promised to work for the town, but instead he used his tremendous influence to fill his bank account and pockets,” federal prosecutor Geoffrey S. Berman said in a statement.

He warned that he expects Silver’s condemnation to make it clear to politicians that doing favors for their benefit is illegal and that they will serve time for it.

Silver was arrested in January 2015 and shortly thereafter, in May of that year, the then president of the state Senate, Republican Dean Skelos, was also arrested.

The accusations provoked a strong outrage in New York, as both, along with Governor Andrew Cuomo, were considered the three most powerful politicians in the state.

Skelos, a state senator between 1985 and 2016, took advantage of his position to obtain work for his son in companies seeking public contracts in the state and both faced trial together for bribery, extortion and conspiracy to commit fraud.

They were found guilty and, like Silver, their conviction was revoked in September 2017 for the same reasons.

In the second trial, father and son were found guilty on July 17 and will be sentenced on October 24.