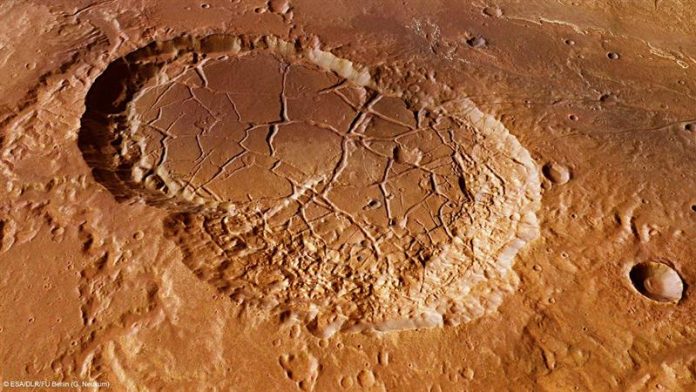 Mars can be sighted by the human eye with the greatest clarity in the last 15 years from this midnight, thanks to the orbits of both planets that have made them to be at the closest point in this period, Efe explained today. NASA scientist Gerónimo Villanueva.

“Mars approaches the Earth every two years, but, at this moment, it will get closer by its orbit than other times and we will see it very bright and bigger than usual”, said Villanueva, an astronomer of Argentine origin who works in the Goddard Space Center of NASA.

However, people will be able to see this “particular” event starting at midnight today from anywhere in the world.

“For this, they should raise their eyes towards the Moon and, to their right, they may find a red-orange point brighter than normal-Mars-and, at their side, another planet: Saturn,” explained the planetary scientist.

This astronomical phenomenon, which will occur again in 2033, occurs due to “relatively simple” circumstances, according to Villanueva.

The Earth goes around the sun every year (terrestrial) and Mars every two, so both planets are aligned and are closer than usual.

However, the orbit of Mars is “very eccentric”, that is, there are times when it is farther from the Sun and others closer, in comparison to the variation of the Earth.

Thus, the orbit of the red planet, one of the most irregular in the Solar System, and that of the Earth align with the Sun in a synchronized manner every fifteen years.

From NASA, this occasion means a great opportunity for the researchers of the Hubble Space Telescope, which is operating “at its best” since its launch in 1990.

“Hubble allows us to observe the Solar System and outside of it for a long time, it is a very complete information platform that helps us understand, for example, how climates change on different planets,” Villanueva said.

In the case of Mars, Hubble captured an image last week where it is seen that the red planet is covered by a huge cloud of dust, which has led to a “global storm” in that world.

That knowledge is “very important” for the space agency, which has a series of robots on the Martian surface to analyze that planet.

NASA, in fact, recently lost contact with the rover “Opportunity”, which uses solar panels as an energy source.

Because of that dust storm documented by Hubble, “Opportunity” is not getting the necessary sunlight to work and has gone into a state of hibernation until its panels are cleaned and the Martian atmosphere cleared.

One of the main objectives of all these investigations, without a doubt, is the arrival of man to Mars, the planet that these weeks can be clearly observed by millions of people from Earth.

This mission to Mars of “extremely complex logistics” would last 3 years, since, with current technology, it takes 6 months to get there.

Once the astronaut reached Mars, the two planets would not be aligned, so you should wait two years for that window of opportunity to open again.

In addition to the 6 months of return, the NASA scientist recalled that a launch base would have to be built on Mars, a kind of Cape Canaveral on the Martian surface.

“We are working so that in a term of between 10 and 20 years we can send the first man or woman to Mars,” said Villanueva, who predicted that person “has not yet reached the university.”

That anonymous teenager, without knowing it, will be looking at midnight to Mars, the planet he will try to conquer in the coming decades.