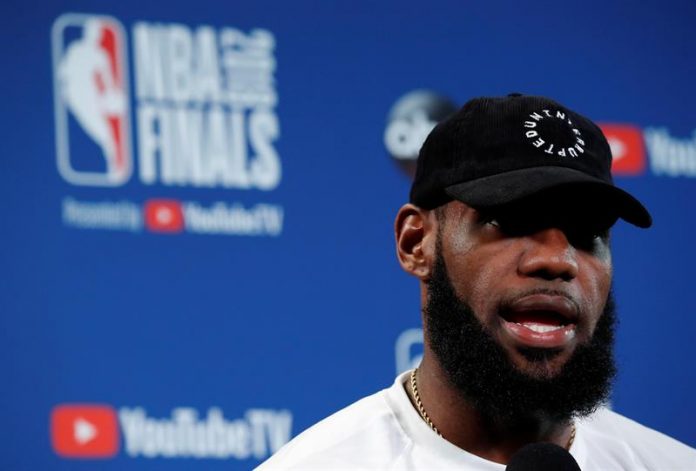 The forward LeBron James, who is already a new player of the Los Angeles Lakers, in the absence of signing the official contract, allows him to reach the Western Conference as the number one of the greatest stars in the NBA and leave the East with just one of the best in the league.

According to the performance of the players in the field and the contribution to their respective teams, in the list of the 14 best of last season, all are now in the Western Conference, except the Greek forward Giannis Antetokounmpo, of the Milwaukee Bucks .

James, 33, who signed a contract with the Lakers for four seasons and 154 million dollars, although he finished second in the voting for the Most Valuable Player Award (MVP) of the season, which was won by the guard James Harden, of the Rockets of Houston, had his best season as a professional and also completed the 82 games.

Free of injury problems was an unstoppable force in the field during the regular season and despite not having the best help with the rest of the teammates of the Cavaliers, in the end got them to finish in fourth place in the Eastern Conference.

Then in the postseason, James, who has four MVP awards and three league titles, once again led the Cavaliers to the NBA Finals for four consecutive years, although they lost by a 4-0 sweep to the NBA Finals. Warriors of Golden State, his “executioners” of the Western Conference, who will now have direct rivals throughout the competition.

Precisely, the second best star of the NBA is forward Kevin Durant, of the Warriors, who already confirmed his renewal with the current league champions for one more season and a second as his option.

Forward Kawhi Leonard, of the San Antonio Spurs, a native of Los Angeles, who has already said he does not want to continue with the Texan team, ranks third in the list of the best, and could be the next season the new James partner, if negotiations between the directors of both franchises come to fruition to close a transfer.

Although the same one appears very complicated in front of which the Lakers would have to give the Spurs several young talents that they have in the staff and that they wish to maintain so that they are the nucleus that support the work of James during the next seasons.

The fourth place is occupied by the undisputed titular base of the Warriors, Stephen Curry, who along with Durant were the key to obtaining the title of champions for the second consecutive season and the third in the last four NBA Finals disputed.

While the fifth is for another base, Russell Westbrook, of the Thunder of Oklahoma City, team that will also keep in his squad the All-Star forward Carmelo Anthony and Paul George, which was another of the goals to be achieved by the Lakers, before he refused to negotiate with them and renewed with his current team for four seasons and 137 million dollars.

The sixth place is occupied by power forward Anthony Davis, of the New Orleans Pelicans, which has now become the main objective of the Eastern Conference teams in the fight to recover the stars.

While base Rock Paul Chris Paul remains with the Texan team to sign a new contract for four seasons and 160 million dollars, six more than James will win with the Lakers, and ranks seventh in the the list of the stars of the NBA.

His comedian, Harden, is the eighth and also undisputed franchise player with the Rockets after winning his first MVP award of the season.
Antetokounmpo is next on the list as a franchise player for the Milwaukee Bucks, the only Eastern Conference team that now has a player considered a star and a franchise.

The tenth place is for power forward Draymond Green, of the Warriors, who has become the most complete player the Warriors have and with the greatest presence in the area, his contribution being decisive in the triumphs of the current league champions. .

The eleventh place is occupied by guard-forward Jimmy Butler of the Minnesota Timberwolves, who acquired it in 2017 by transferring with the Chicago Bulls, which meant that the Eastern Conference was left without another star.
His teammate, the Dominican American center Karl-Anthony, occupies the twelfth place on the list and between them they got the Timberwolves back to the playoffs for the first time in 12 seasons.

The thirteenth place is occupied by George, the player who had also been a franchise with the Indiana Pacers, but said he wanted to be traded, thinking of the Lakers, in the end in 2017 he came to the Thunder, which made him forget his desire to reach the Californian of his hometown.

While the French pivot Rudy Gobert, chosen as the Defensive Player of the Year, is the franchise man of the Utah Jazz, which this season became the great revelation to return to the playoffs.