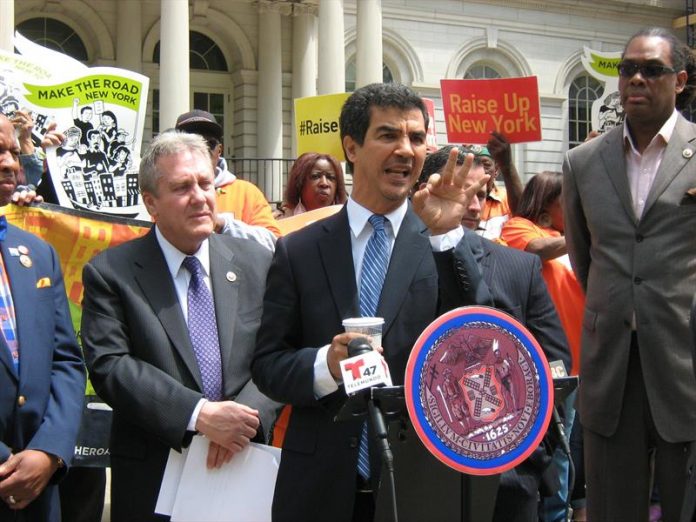 New York politicians today called for children who are separated from their parents at the border to be treated humanely in the centers where they have been placed.

Councilman Ydanis Rodriguez and state Assemblywoman Carmen de la Rosa criticized that the children who were placed in a shelter in this city, whose number is unknown, have their faces covered in a public place.

“We must protect their confidentiality without taking away their dignity,” said Rodriguez, an educator, saying that this action has a long-term impact on children, who will believe that “he was ashamed or not accepted and for that reason he was hiding in the streets. ”

According to data from the Department of Homeland Security, between May 5 and June 9 more than 2,300 children have been separated from their parents at the US-Mexico border and taken to various shelters in the country.

Meanwhile, their parents have been prosecuted for illegally entering the United States.

New York has been one of those destinations and according to Governor Andrew Cuomo, more than 70 children have been brought to the state. Cuomo announced that he will sue the federal government for violating the constitutional rights of children and their parents for being separated.

The councilor indicated, during a joint press conference in front of the center that allegedly covered the faces of children, that the migration crisis in the country, which led to minors being brought to this city from Texas, thousands of miles apart from their parents, already exceeded the limit.

“It is a crime to take a child thousands of miles away” from his parents, he said, adding that this crisis requires an urgent solution with the approval of a migratory reform that is viable for separated families and young dreamers. They were brought to this country when they were children.

Both Rodriguez and De la Rosa said they are not against the center that houses some of the children in the city, which they said has provided services to children for years, but asked for a humane treatment for the children.

De la Rosa indicated that these centers operate under state license and that they have the right to know when they are sent, how many are and where they are being housed to provide services.

“I can not imagine the fear of these children in a strange country and alone, we want them to know that they are not alone and that they are treated with dignity,” he said.

The Assemblywoman called on the community to support a fundraiser by a coalition of organizations, including the Civil Liberties Union, to defray the cost of legal services for children brought to New York.

Alida Álvarez, a neighbor of the community where she locates the shelter, believes that it is “unfair” to separate families and could not avoid crying when talking about children.
“It broke my heart, they covered their faces as if they were criminals,” the woman told Efe, one of several neighbors who came to the end of the conference to express their disagreement with the separation of families.

“My daughter is destroyed, I am a mother and grandmother and I think about the pain of the parents,” he said, adding that “that man does not deserve that position,” referring to President Trump.

Governor Cuomo visited one of the centers that houses children in this city today, and before he sent a letter to the secretary of the federal Health and Human Services Department, Alex M. Azar, demanding to be told how many children have been sent to this state to ensure who receive the services they need.