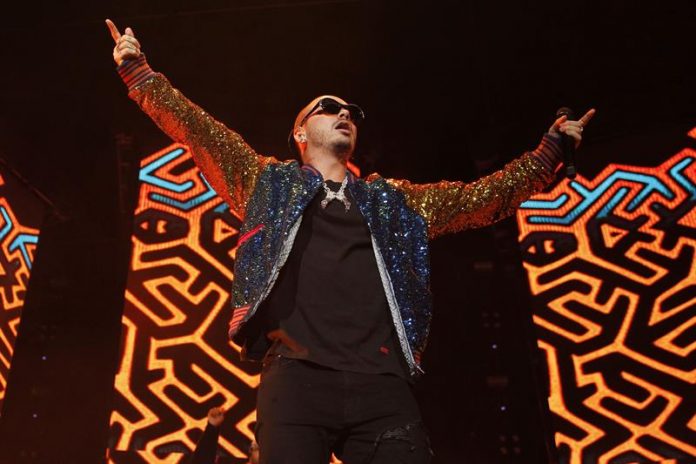 Although he did not achieve the difficult goal of filling the Arena in Mexico City, the Colombian singer J Balvin made his Mexican audience vibrate today with his reggaeton hits and Latin urban rhythms in an explosive concert.

The event was an authentic roller coaster of emotions, which began with a hit of the Colombian hits and had a moment of relaxation to then recover the maximum intensity.

How could it be otherwise, J Balvin premiered at the Arena with “Mi gente”, a song with electronic rhythms that shattered records on YouTube and made the audience scream so much that you could hardly hear the music.

The fans of Balvin also showed their great dedication during the performance of “Ahora”, theme with which they could accompany their idol singing the choirs, something that made the Colombian very happy.

The 22,300 squares of the Arena of Mexico City were not occupied in their entirety, but the auditorium also vibrated with hits like “Machika”, “Safari”, “Bonita” or “Sorry”, simple arisen from the collaboration with Justin Bieber.

The intensity of the show was on the decline when the Colombian brought out less danceable songs, but another of his best-known songs, “6 AM”, recovered the rhythm of the night and raised the fans who rested in their seats.

The shouts of “connect with the best vibes” had a good response from the public, who turned this auditorium of the Mexican capital into a giant disco in which thousands of people danced as if there were no tomorrow.

The only discordant note in that environment was given by the numerous children who attended the concert accompanied by their parents despite the sexual content of many songs by J Balvin and the numerous criticisms that characterize his macho lyrics.

Given that, the author of the phrase “if you need reguetón, dale” returned once again to defend the genre with which so many successes has been reaped: “I do not understand why they criticize it if people love reggaeton. Do not listen to him, “he said.

J Balvin, originally from Medellín, did not need large sets to please the attendees, and with only four columns with LED screens, four dancers and some confetti could illuminate his audience.

The biggest surprise took place in the middle of the concert, when the Colombian appeared singing among the audience and surrounded by an ocean of cell phones.

He did not disappoint either in his already extravagant traditional costumes: at the beginning it consisted of a coat with gold and blue sparkles, and ended the night disguised as a hockey player.

What is never lacking in these shows are the signs of affection towards the country that receives the artist and J Balvin was no less: “With Mexico nobody gets in,” the Colombian choir, who disputed the position of reggaeton king with his countryman Maluma

When it seemed that the “show” was coming to an end and the lights were off, the audience was able to spend their last strength dancing “X (Equis)”, the collaboration between Nick Jam and J. Balvin that became the video of the Latin music that fastest reached 100 million views on YouTube.

Especially fortunate were three children and two girls who were selected to close the night from the top of the stage, where they could live in their own skin the “vibes” that the Colombian likes to claim.

Previously, J Balvin had sung his song “I still miss you”, which is what the faces of the audience said, reflects the state of mind in which many Mexicans will stay while the Colombian continues his tour Vibras Tour in other countries.