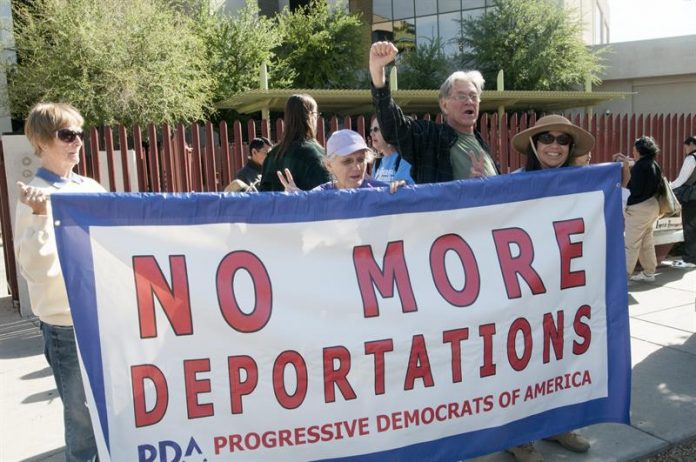 The deportations in the first year of the president of the United States, Donald Trump, decreased with respect to the last year of Barack Obama, but increased arrests and xenophobia, said today the civil organization Migrant Agenda.

“If we compare the first year of Trump with the last one of Obama there is a decrease in deportations of almost 24%, but that is not good news,” said Eunice Rendón, Migrant Agenda coordinator at a press conference.

“Since the arrival of Trump, arrests of undocumented persons have increased by 42%, although not all of them have become deportations,” Rendón said.

He recalled that in the United States there are 56 immigration courts, which under the presidency of Obama “were already overflowing” and in which now, with the current number of arrests, “there are over 650,000 pending cases.”

Rendón noted that the purpose of the US immigration authorities is to “increase deportations” and therefore increased by 35 more prosecutors for deportation trials and 18 judges for immigration issues.

In the first quarter of 2018 the number of deportations of Mexicans increased by 40% for a total of 53,764 people, which generates pressure mainly in the border areas, he said.

He said that according to reports from Human Right Watch and the National Human Rights Commission (CNDH) of Mexico, the profile of the deportees is far from being the “bad men”, as Trump described the undocumented Mexicans on several occasions, and that On the contrary, they are “productive and good people”.

Rendón asked the Mexican government to devote more budget to the defense of Mexicans in the United States and to improve the integration and reintegration policies of deported Mexicans.

The expert on public policies and migration said that the refuge and asylum are migratory figures that have been growing and will be seen more frequently in Mexico as it happened recently with the migrant caravan of Central Americans that crossed Mexico in the previous weeks to travel to the United States. .

Edgar Corzo, fifth visitor of the CNDH, pointed out “abuses, inhumane treatment and violations of human rights against Mexicans in detention centers” in the United States.

He specified that there are 692,298 cases pending resolution by the United States immigration judges and that a resolution takes up to 565 days to be issued.

Rendón and the CNDH inspector pointed out that attacks in the United States have increased by 20%, and that there is a 10% growth in racist groups.

“This is a tangible impact of how a warlike discourse and of xenophobic characteristics like that of President Trump impacts a part of the population to commit acts of violence against migrants,” Rendón concluded.