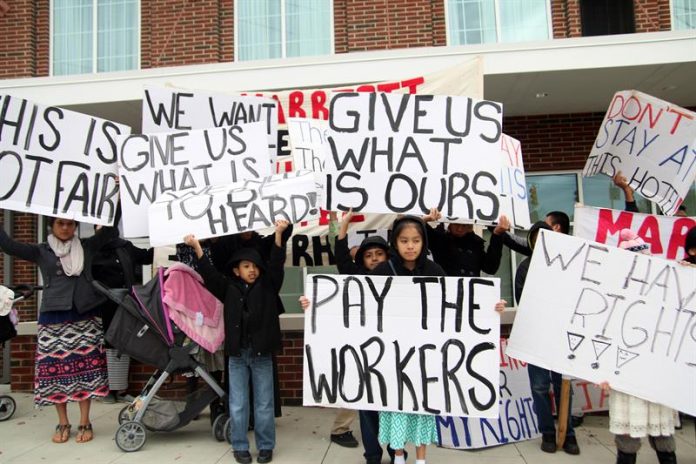 Hispanic workers continue to be exposed to more labor risks than the national average of the country, although the number of deaths of Latinos in their jobs decreased in 2016 with respect to the previous year.

In 2016, a total of 879 Hispanic workers died at their place of work, which means a decrease of 2.6% from the 903 deaths recorded the previous year, according to data from a study published today by AFL-CIO, the largest trade union in the country.

However, the mortality rate in this sector is still slightly above the average for national workers, mainly because Latinos face more health and safety problems due to working in dangerous jobs with “inadequate” security measures.

“It is unfortunate that working people have to continue to lose their lives due to the greed of the corporations, the selfish and irresponsible decisions that are made in the corporate boards and in Washington are killing the people who have built this country,” denounced. today in a conference call the president of AFL-CIO, Richard Trumka.

“This is officially a national crisis,” added the union leader.

In the year analyzed, the construction industry was responsible for the majority of deaths of Latino workers (283), followed by transport and storage (108) and garbage management services (112).

One of the workers who has reported bad conditions and discrimination in his company, the Mexican Miguel Angel Ramos, 34, criticized in another call organized by the National Occupational Safety and Health Council (COSH, for its acronym in English) that the The company he worked for did not train him for the dangerous tasks he had to perform.

Ramos explained that he suffered an accident that marked him “for life” while working for Atlantic Railway in New York in the maintenance of the local metro and train tracks.

“While I was carrying a very high weight, I hit the right part of my head which caused me to lose half of my hearing,” said Ramos, who said that his superiors did not call the medical services and only advised him to rest. one hour and go back to work.

In addition, the man explained that he felt discrimination at work after his bosses began to laugh at him and call him “the Mexican”, one of the main reasons why he left his job and went to dedicate himself to driving a taxi.

At the same conference, COSH executive director Jessica Martinez considered that Latino workers “suffer discrimination at work when they do not receive adequate training, safety equipment or materials in a language they understand.”

“This can only increase the risk of illness, injury and even death in the workplace,” Martinez reiterated.

In its report called “The dirty dozen”, the COSH denounced the bad practices of large companies, such as Amazon, company in the seven employees have died in their warehouses since 2013.

Both groups, AFL-CIO and COSH, urged the government of President Donald Trump to increase funds for the Occupational Health and Safety Administration (OSHA), whose budget has fallen significantly in recent years.

In fact, with current resources, OSHA’s 764 federal inspectors would need 158 years to visit the nine million workplaces they must register at least once. efe