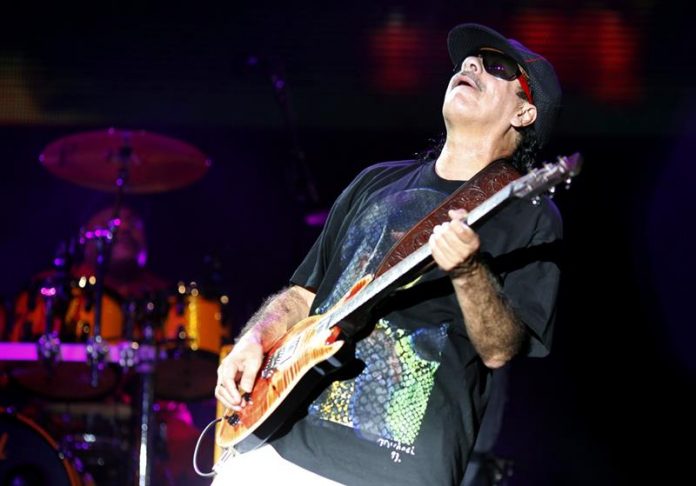 Carlos Santana, who left the guitar for a moment to be a producer of a documentary about the legendary activist Dolores Huerta, retains 70 years of mysticism that made him unique and told Efe that he continues working as a young man so that “the light of love “change” the darkness of fear. ”

“Nothing gives me more strength than, as they say in the street, to tighten my pants against the darkness, that gives me vibes, I have 70 years in my body, but in my spirit I feel like I am 17 and I am ready to shake myself,” he assured. the charismatic Latin musician in a telephone interview.

“Dolores” is the title of the documentary that Santana (Autlán de Navarro, México, 1947) has produced about Dolores Huerta, a figure in the fight for civil rights in the United States and who, together with César Chávez, led the protests of the Chicano movement and for the rights of Latino farmers since the 1960s.

Under the direction of Peter Bratt, brother of the actor Benjamin Bratt, “Dolores” premiered last year with the applause of the critics, and next Tuesday, March 27 will reach US television on the PBS network.

“I never thought about making this transition (from music to film.) What happens is that the natural thing for me is to offer my services to ‘the queen of light’,” argued Santana, referring to Huerta with devotion.

After disembarking from very young in San Francisco, Santana took his first musical steps within the group Santana, crucial band of the fusion of psychedelic rock and Latin sounds, and at the same time came into contact with the hippie counterculture and the Chicano movement , in which Huerta was a reference.

“It is a very normal, natural thing to use this energy, to which people tell money, to make an offering of love to our queen, she is my queen: of equality, of justice, of integrity. that more and more human beings know who she is, especially the Latin people, because they do not know, “he said.

Huerta, who received the US Presidential Medal of Freedom in 2012, founded with Chavez the union known today as the Union of Peasants (UFW), and the example of his tireless activism was reflected in his famous motto “yes, It can”.

“She was the one who invented the ‘yes, you can’ because a lot of people split up, she backs down, but she does not back down, she pushes forward,” she said.

“Thank God I had the opportunity to share with her the same principles of how to protest injustices, with her and with the other teacher, César Chávez,” Santana recalled.

The musician also explained where the social commitment comes from: “My mother and my father taught us that it is important to feel the pain of others, one comes here (to the United States) to get better, of course, and when one starts to stop ( to lift) it is important to help other people not to suffer and have more possibilities and opportunities to succeed. ”

Every time Santana talks about Huerta, who at 87 years old continues with an amazing activity in different causes, he does it to dedicate compliments and more compliments.

“It represents a bridge of future for all women, she is like Bob Marley, like John Lennon, like Martin Luther King,” he said before mentioning that Huerta had to break down two barriers: being a Chicana and being a woman.

“The future is women, the love of them, the compassion of them, their determination, machismo is a word that for me is fear,” he argued.

And, again, she returned to the spiritual teachings that have marked her both in her life and in her musical work: “The thing is not complicated because there are only two things on this planet: love and fear, and she offers her complete love, solidary and unconditionally “.

Within that mystical battle between light and darkness, Santana assured that today the United States is “worse than ever”, since it promotes “a lot of division, much superiority and inferiority.”

“The most important thing is that we have to unite and, with grace, elegance, honor, strength and intelligence, we must transform the fear of the people,” he said before the challenges of Latinos under the controversial presidency of Donald Trump.

Santana does not seem to lack the strength nor the desire to continue on foot with his guitar, since in 2017 he released the album “Power of Peace” with The Isley Brothers and this year he plans to continue with his concerts all over the world .

However, the artist played down the importance and said that his secret responds to supernatural forces: “I find inspiration and motivation giving thanks to God, because the more you give thanks to God, the more energy you receive, the more inspiration”. (efeusa)