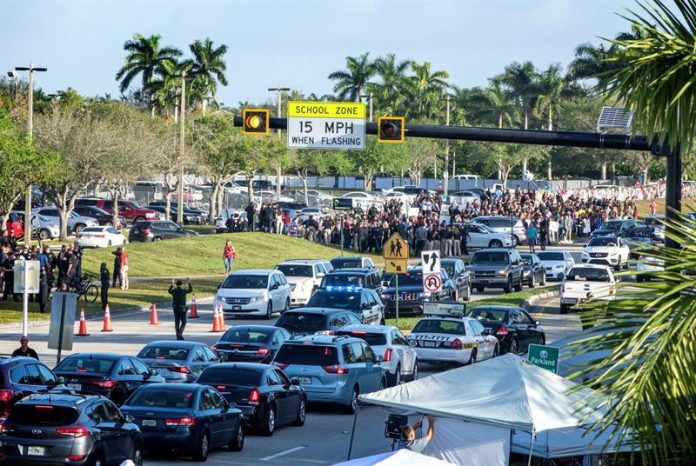 The more than 3,000 high school students Marjory Stoneman Douglas Parkland returned today to the classrooms where two weeks ago an alumnus killed 17 people surrounded by dozens of people who wanted to make the return of the youth less painful.

Without backpacks or books, the students arrived “nervous” early in the morning at school to face a first school day of reduced hours and dedicated to sessions of emotional reinforcement.

“Today, nobody has the head to study,” Mexican student Valeria told Efe, who thanked that this week’s sessions serve to have support and “understand how it should be to return to the usual classes.”

In the middle of a strong police presence the traditional yellow school buses circulated around the school and the auxiliary traffic agents regulated the passage of cars and students as they did before February 14.

“It was time to go back,” said Coryn, one of the students who was greeted outside the school by former students, students from other schools, parents and agents from various Florida law enforcement agencies.

“Being at home watching TV does not help, today’s support shows mean a lot,” the young woman assured Efe after having embraced with a loving neighbor.

Donette, who left her nephews at school, told Efe that she does not know if this school will be “the same again”. “I just told them to spend the day as well as possible and not think much about it, it’s hard,” he confessed.

Connie Buser, a neighbor of Coral Springs, a municipality near Parkland, was one of the many people who received the students with the cry of “We are with you, be strong!”.

Steven Porter, a former student at the school, told Efe that seeing his school “breaks his heart”.

The samples of support came from various parts of the country, such as a school in New York whose student representation spent the whole week in Florida “to be next to Stoneman Douglas”.

“It could have been our school, we have to come together and show our support, and although it is tragic, they are very strong,” said Hannah, one of the New York students.

Also present at the return, the superintendent of schools in Broward County, Robert Runcie, assured that they do not want to convert the Stoneman Douglas school into “a fortress”, but the police measures will be more intense “until the near future”.

The killing of the past Valentine’s Day has unleashed a student movement in favor of increasing the control of weapons, called Never Again, whose most visible faces were not present today.

David Hogg, one of the promoters, announced days ago that he will not return to class until a law restricting the use of firearms is approved.

Despite regretting the lack of action in response to the massacre, Juliana Campos did return to school and did so with a rose in her hand that was handed to her by a police officer. 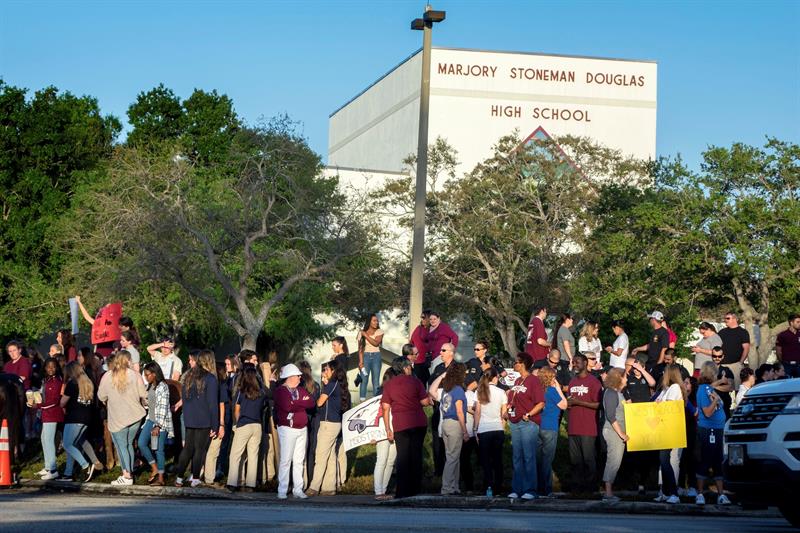 “We’re not going to shut up, we talk to the president (Donald Trump), but after all this I learned that despite what happened, it’s not going to change anything, we can lose so many people and there’s still no change,” Campos lamented. who had on his phone a picture of the Venezuelan Joaquin Oliver, one of the 17 victims of the shooting and close friend of the girl.

“Everything I do for him, gives me the strength to return on a day like today, it will be good to do therapies and unite all of us,” she said.

The father of Meadow Pollack, one of the victims, was present in the return to the classes accompanied by his dog.

“We have to focus on making the schools safer, I will have the law passed in Florida this weekend, but then I will continue with the other states, so that my face is the last of a father whose son has been murdered,” he said. Andrew Pollack.

Another student, José, entered the school with shouts of encouragement, and although he said he felt “nervous”, he was grateful to be able to return to “normal”.

This same student said he agreed with the proposal to demolish the building number 12, where Nikolas Cruz opened fire indiscriminately, since “many students suffer a trauma and it would be difficult to re-enter there.” efe