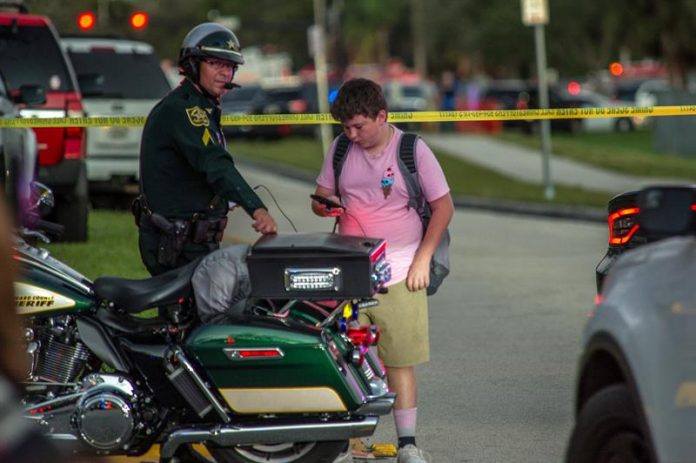 At least 17 people died in Florida today in a new shooting at a school in the United States, the eighteenth year so far in schools in the country, in a massacre that is attributed to former student Nikolas Cruz.

Scott Israel, Sheriff of Broward County, north of Miami, said that in the “catastrophic” incident at Marjory Stoneman Douglas High School in the city of Parkland, 17 people died at the hands of Cruz, 19, who perpetrated the massacre armed with a semiautomatic rifle and with several loaders in his power.

The youth, explained Israel, was arrested without resistance when confronted by agents near the center, located in an area with a large presence of Latin American residents.

Israel said the suspect fired just as the students were leaving the center, where the SWAT elite police teams are working to secure the area, after the nearly 3,000 students at the school were evacuated.
The uniformed said that researchers are already analyzing the web pages that the young man visited as well as their social networks and what they have found so far is “very disturbing.”

The police chief told the press that at least 12 of the victims were killed inside the school, while another three died abroad and two others died in the hospital.

At a press conference held tonight, the Governor of Florida and the Attorney General of this state, Pam Bondi, reported that the state government will cover all funeral expenses of the victims and therapy for survivors.

“This is pure and absolutely diabolical,” said the governor, who evaded questions from journalists about more gun regulation.

In that same press conference, Sheriff Scott revealed that of the 17 dead 12 have already been identified and are notifying their relatives. The sheriff said that at the time of the incident, not all the victims were carrying ID or cell phones.

He added that until the relatives of all the dead people are informed of the fact they will not make their names public.

Medical sources at Broward Health North Hospital indicated that three of the injured are in critical condition while others are stable and undergoing surgery.

After being arrested, Cruz was transported to this same medical center and later to the offices of the Broward sheriff for interrogation.

In videos posted on social networks, students of the school can be seen protecting themselves while listening to several shots fired with what is presumed to be a semi-automatic weapon. Local media suggest that it could be an AR-15 rifle.

This shooting occurred on Valentine’s Day, which is traditionally celebrated in US schools. as a day of friendship between classmates and teachers.

Speaking to the Miami Herald newspaper, Jim Gard, a math teacher at the school, said that teachers and administrative staff had been warned last year not to allow Cruz to enter school with a backpack because it was considered a “potential threat”. ”

“There were problems with him last year in threatening students, and I think he was asked to leave school,” said the teacher, a version that Israel confirmed by assuring that he was expelled for disciplinary reasons.

Companions of the suspect told local media that Cruz was “scared at times,” because he sometimes carried several weapons and showed them to his colleagues.

However, Robert Runcie, superintendent of the Broward school system, told the press that there were no reports of alarming behavior by the young man, who by his age could legally buy guns in Florida.

Runcie added that the educational center will be closed for the rest of the week and counseling will be offered to relatives of the victims and survivors.

According to the count of Everytown for Gun Safety, a group that defends greater control in the sale of weapons, so far this year there have been 18 shootings in US schools, in 10 of which were recorded dead or injured.

Since 2013, the number has risen to 291 events of this type in educational centers.

This type of events, such as the one at the Sandy Hook School in Newtown, Connecticut, where twenty children and six adults died in December 2012, has generated a wave of petitions to pass laws to achieve greater control in the sale of arms.

But the Congress, controlled by the Republicans, ended up blocking a proposal to establish a system of background checks and prevent weapons from reaching the criminal or mentally ill.

President Donald Trump, who was informed of what happened from the first moment, today lamented the “terrible” shooting and said that “no child, teacher or anyone else should ever feel unsafe in an American school.”