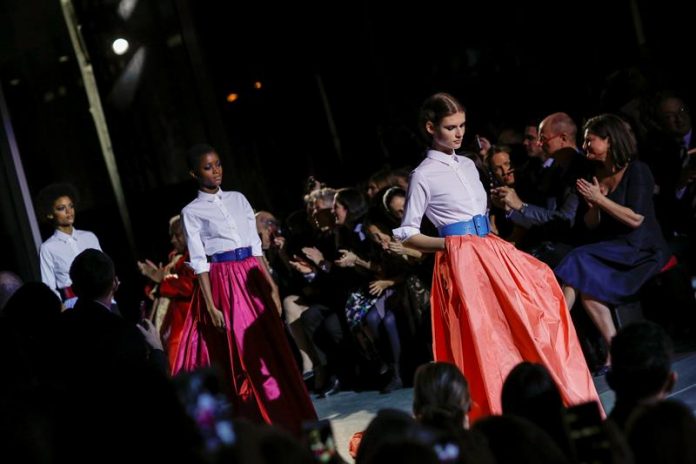 The Fashion Week in New York was dazzled by the good taste of two fashion houses of Latin American origin: Oscar de la Renta, founded by the Dominican icon who died in 2014, and the signature of the Venezuelan Carolina Herrera, who gave the relief as a designer in her last fashion show.

Laura Kim and Fernando García, creative directors of Oscar de la Renta, dressed for the autumn to a feminine and sophisticated woman, either with skirt and pants in green khaki combined with white shirts or sweaters, or with dresses, sober and monochrome with motives floral, or more flirtatious, with drawings of animals.

The jackets lengthened and adopted straight lines, dyed camel, off-white or passion red, but in contrast to them highlighted a spectacular crimson coat in “degradé” with voluminous fall in tulle, one of the star fabrics of the parade.

The firm showed off precisely in the models for special occasions, and astonished the dresses, in which the delicate tulle wrapped the feminine forms with subtle transparencies furrowed with embroidered jewels, flowers in velvet or swirls of sequins.

A trio of evening dresses in black velvet dazzled the actress Dakota Fanning and model Isabeli Fontana, sitting in the front row of the fashion show set inside the historic Cunard building, decorated for the occasion with trees flanking the catwalk.

One of those dresses was of closed neck and long sleeve, with silver appliqués in shoulder and hip drawing branches; another, tube type and with a strapless neckline also adorned; and the last, which closed the parade, had a deep V-neck, a front opening in the skirt and an elegant back layer.

Of impeccable cut were also the designs presented later by Carolina Herrera, who said goodbye with the show today to the creative direction of the house that bears her name to dedicate more time to her family, although she will remain as an ambassador of the brand.

The experience of 37 years in the fashion sector of the Venezuelan was evident in a glamorous collection that brought together at the Museum of Modern Art (MoMA) numerous faces known admirers of her work, such as Bianca Jagger, who accompanied her in her first parade and did not want to miss the last one.

They highlighted the flowing dresses in fuchsia, orange and light blue, with pleats that hid colors; in tulle and with volume, or in shirt style and marked waist, as well as prints with drawings of tigers and leopards in metallic finishes.

They did not miss their classic black and white binomial or their white shirts, which combined with skirts of lateral opening covered with transparencies to insinuate without teaching, and in the final section, with long skirts in jewel colors adjusted by wide belts.

When the catwalk was empty, the applause replaced the voice of Ella Fitzgerald, who had given rhythm to the parade, and the audience on foot received a Carolina Herrera wrapped by his team and designer Wes Gordon, who handed him a bouquet of roses before picking up your witness.

In the morning, the firm Ralph Lauren also showed off its “savoir faire” within the conservative options, with a spring-summer collection of sailors that took advantage of the colors of the American flag and even launched with bright yellows or greens for park the “winter blues”.

The American wanted to transfer his audience and, therefore, whoever carries his designs “ready to wear”, to his vacation home in Jamaica, with sets that depended on white and navy blue in most cases, whether sweaters stripes with “shorts” or floral dresses of neckline “halter”.

More risky and informal was the firm 3.1 Phillip Lim, who applied his “effortless chic” to loose and pajama-style outfits in pastel colors, while raising other outfits suitable for the night with overlays of printed fabrics, especially in dresses. (efeusa)