NASA celebrates 60 years of “Explorer 1”, its first success in the space race

More than 30 million families will be left without special...

The committee that investigates the assault on the Capitol summons...

The US Supreme Court overturns the Biden law that requires...

Cuba demands the closure of the Guantánamo detention center, which...

NASA commemorated today the 60 years of its first success of the space race, when it put into orbit in 1958 the artificial satellite “Explorer 1”, which reduced the breach opened in the Cold War by the Soviet Union with two launches a year earlier.

“It is important to remember because it shows us that nothing is impossible in the United States, really the ‘Explorer 1’ began the race in space,” said Robert Cabana, director of the Kennedy Space Center, in Cape Canaveral, headquarters of the historic launch on the Atlantic coast of Florida.

After discovering a plaque in Complex 26 of Cape Canaveral, from where the satellite was launched, Cabana highlighted the importance of the space program for the country “at that time and today”.

“Obviously the mission has changed, but it is critical for us as a nation and for us as world leaders in many different areas,” he added.

This successful maneuver was carried out under the pressure generated in 1957 by the triumph harvested by the Soviet Union with the launching of “Sputnik”, the first rocket that circled the Earth.

That year the Soviets also launched a second satellite, the “Sputnik II”, which disintegrated in space with the dog Laika on board, as there was no module back to earth, while the Americans saw humiliated how their rocket exploded on land “Vanguard”.

“The Russians have always been in competition, they tried to reach the Moon, but the president (John Fitzgerald) Kennedy set out to be the first,” Cabana recalled.

There has always been the “desire” of the United States to lead the space race and that was demonstrated from the beginning with the “Explorer 1”, because there is a permanent competition with Russians, Chinese and “the world powers that dominate the space”.

At that time, alarmed to be left behind in the space race while the Cold War intensified, the US government ordered the Jet Propulsion Laboratory (JPL) and the Army Ballistic Missile Agency to carry out the launch of a satellite as soon as possible. 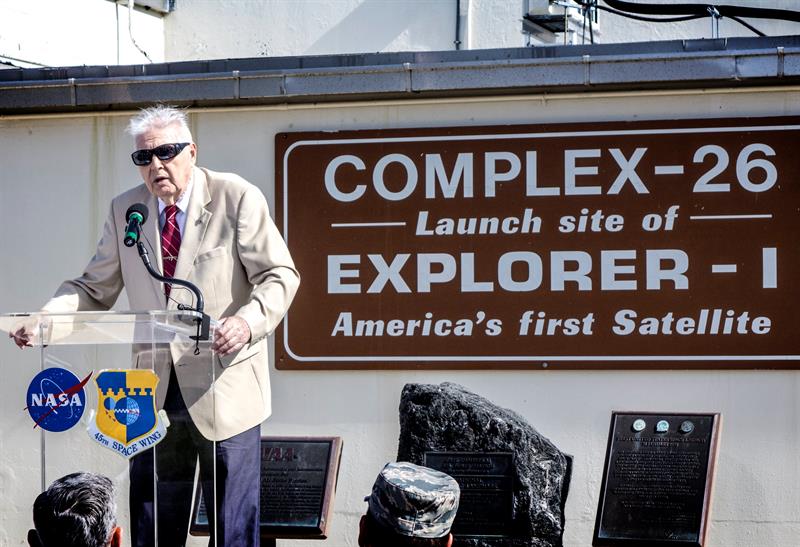 In addition to being the first American space rocket, the “Explorer 1” was a pioneer in carrying scientific instruments and in making a discovery of the space age: the Van Allen belt of high radiation that surrounds the planet.

Cabana said that the launch of “Explorer 1” also prompted the creation of NASA in October 1958 and transformed the JPL, dedicated until then to the design and manufacture of missiles, in a center for space exploration.

Twelve years later it entered the Earth’s atmosphere and burned after more than 58,000 orbits.

At the anniversary came John Meisenheimer, 84, the officer who gave the meteorological clearance for the operation after frustrating the previous two days due to poor conditions.

Meisenheimer related the pressure he had from senior officials who asked him to “handle the situation” on January 29 and 30 when he warned of strong winds.
“I could not do anything (to handle it),” he said.

He recalled that he was relieved when one of the military supported him and told him to do what he had to do, until he had a “window of opportunity” on January 31.

With equipment that he described as “primitive”, Meisenheimer contributed to the emblematic operation that propelled not only the space and scientific exploration, but also relieved the Americans of the shame of a failed attempt with the “Vanguard” in the framework of a complicated moment. geopolitical

Veto to Huawei will have great impact in Europe and America, and little in the US and China

San Francisco, .- The decision of Alphabet (Google's parent company) and other companies to abandon their commercial transactions with Huawei to comply with the...

Floyd Mayweather used the Irish flag and imitated Conor McGregor's way to make fun of him, while the European 'stole' the portfolio of the...

Companies and businesses established by Latinos are the fastest growing in the United States, although they often find barriers to their financing, according to...

Different groups and organizations from Hollywood and the entertainment world urged today in a joint letter to Congress that they face President Donald Trump...

Republicans to kill U.S. rules on corruption, environment, labor and guns next week

By Lisa Lambert | WASHINGTON (Reuters) - Congressional Republicans are set to overturn a slew of Obama-era regulations next week, including a controversial anti-bribery rule...