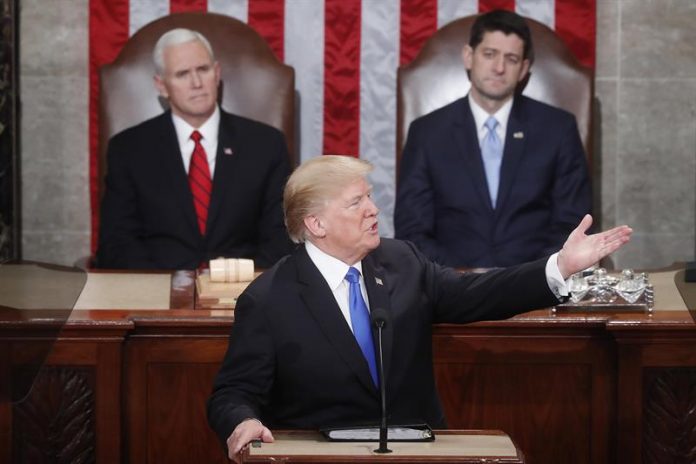 The president, Donald Trump, pleaded today for “modernizing and reconstructing” the US nuclear arsenal, during his first speech on the State of the Union before Congress.

“As part of our Defense, we must modernize and rebuild our nuclear arsenal, hoping never to use it, but making it so strong and powerful that it will deter any act of aggression,” the president said.

“Maybe,” he added, “some day in the future there will be a magical moment when the countries of the world come together to eliminate their nuclear weapons.” Unfortunately, we have not arrived there yet.

Earlier this year, the CNN network announced that the Pentagon is preparing a plan to update the US nuclear arsenal in the face of the threat from North Korea.
The plan would involve an investment of one trillion dollars in the next three decades, according to this channel.

Before the Congress, Trump also warned that missiles from North Korea could threaten “very soon” the US territory, and that he will respond with a “maximum pressure”, and not with “complacency”.

“Past experiences show that complacency and concessions only incite aggression and provocation, I will not repeat the mistakes of the previous (US) governments that have led us to this dangerous situation,” Trump said.

The president, Donald Trump, today asked the Congress of his country to ensure that only the “friends” of the US benefit from their financial assistance, in retaliation for the vote in the UN General Assembly against their decision to recognize Jerusalem as the capital From Israel.

“Last month, I undertook an action unanimously supported by the Senate just months earlier: I recognized Jerusalem as the capital of Israel,” Trump stressed in his first speech on the State of the Union.

“Shortly after,” he recalled, “dozens of countries voted in the United Nations General Assembly against the sovereign right of the United States to do this recognition, and American taxpayers generously send billions of dollars of aid each year to those same countries.”

“That is why, tonight, I am asking Congress to pass legislation to help ensure that US foreign assistance dollars always serve US interests, and they only go to friends in the United States,” Trump said.

Trump has expressed his anger several times over the December vote in the UN, which showed the loneliness of the US in the controversial decision to recognize Jerusalem as the capital of Israel and move his embassy there: 128 countries condemned him and only 9 they supported.

Trump’s decision, however, is against the position held by the international community and, especially, the resolutions of the United Nations, which has been trying to close the conflict for more than half a century.

The UN continues to defend that the final status of Jerusalem must be agreed upon in a peace process between Israelis and Palestinians, suspended for years, although all parties, even the United States, insist on the need to resume.