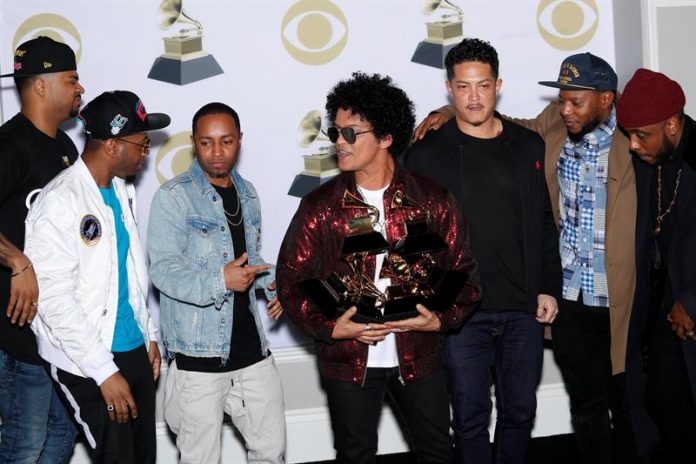 Bruno Mars did that “24-carat magic” that gives name to his last album and devastated the return of the Grammy to New York, where he picked up the six gramophones that he aspired to while the favorite, Jay-Z, left. empty.

Nearby was Kendrick Lamar, who won 5 of 7 nominations. “HHUMBLE.” won the main rap awards: song, individual performance and music video; while “LOYALTY.”, which she plays with Rihanna, won the best sung rap performance, both songs on the album “DAMN.”, winner in the rap category.

Jay-Z, who topped the Grammy bets with a total of eight nominations, was in suspense until the delivery of the album of the year, but did not succeed, as he did in 2017 to his wife, Beyoncé. However, Lamar praised him as one of his teachers, along with Nas and P. Diddy, and proclaimed: “Jay-Z for president!”.

The Puerto Ricans Luis Fonsi and Daddy Yankee (“Despacito”) also went away empty, they wanted to make history with a Spanish theme for better recording, better song or pop performance of a duo or group. Childish Gambino, nominated for five awards, only took the traditional R & B performance, for “Redbone”.

The category of new artist, where Tom Jones, José Feliciano or Cyndi Lauper have passed, added this year the name of the Canadian Alessia Cara, one of the few women awarded in the 60th edition and who, after collecting her prize, asked for equal opportunities , “not only in the music industry.”

The best individual pop performance, which had four female nominations – Kelly Clarkson, Pink, Lady Gaga and Kesha – finally ended up in Ed Sheeran, winner of the best vocal pop album, competing with her hit “Shape of you” and not He attended the ceremony.

With an impressive staging of military and patriotic dyes in which a shooting was staged, Kendrick Lamar opened the gala, which was interrupted by comedian Dave Chappelle ironically about the challenges of being a black man in the current United States. 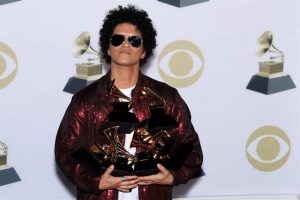 That political tone of the big night of music, this year more diverse in terms of nominees, was also evident in the attire of many guests, who wore white and wore roses in support of the movements against sexual harassment “Time’s Up “and” Me too “, especially women.

Lady Gaga was seated before a piano that extended wings covered with white feathers, as if it were an angel, and before moving on to sing “Million reasons” she exclaimed, precisely, “Time’s up!” (Time is over).

The expected direct “Despacito” contagious to the Grammys with his reggaeton in the middle of gala without the presence of the Canadian Bieber, but of the Puerto Rican model Zuleyka Rivera, sheathed in a “body” of bright fringes that danced to the rhythm of her hips .

However, among the performances stood out that of Kesha, dressed in white and with embroidered roses, who made a moving interpretation of “Praying” with a chorus composed of Camila Cabello, Cyndi Lauper, Julia Michaels and Andra Day, with whom melted in a hug.

“You said it was finished but you were wrong and the best is yet to come,” sang the interpreter, who is mired in a legal battle for harassment and was presented by a claiming Janelle Monae, who recalled that “not only happens in Hollywood and Washington” .

Claimants were also Camila Cabello, who paid tribute to the “dreamers” (dreamers, the undocumented arrived from children to the US) to make way for U2, or rapper Logic, who called for justice for immigrants and equality for women after interpreting “1-800-273-8255”.

Although “Despacito” did not triumph in Latin music, the Colombian singer Shakira achieved the milestone of being the only female artist to win twice the prize for the best Latin pop album, which she already won 17 years ago for her “MTV Unplugged”.

Another artist who repeated distinction and at the same time achieved a milestone was the Canadian The Weeknd, artistic name of Abel Tesfaye, who won with “Starboy” as the best contemporary urban album, the only one to achieve it twice.

There was no shortage of tributes to recently deceased musicians, such as the legendary rockers Chuck Bery and Fats Domino, to whom Joan Batiste and Gary Clarke Jr. dedicated their performance, or Tom Petty, honored by two generations of country musicians, Chris Stapleton and Emmylou Harris.

Nor the funny moments, since John Legend, Cher, Snoop Dogg, Cardi B, DJ Khaled and even Hillary Clinton read humorously excerpts from the book “Fire and Fury”, about the American president, Donald Trump. (efe)