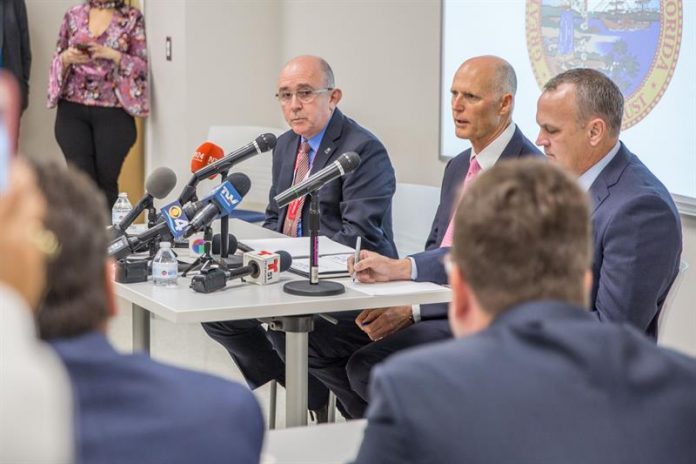 The governor of Florida, Rick Scott, ratified today his support for measures that serve to “end” the “regime” of Nicolás Maduro in a meeting with members of the Venezuelan community held in Miami Lakes (Florida).

Venezuelans based in South Florida defended the need for “humanitarian intervention” in Venezuela in a situation they described as “devastating” and urged Scott to use his influence in the White House to toughen the actions against the government of Nicolás Maduro .

After the meeting, held at a university in Miami Lakes, the governor told Univision that the legislative initiatives he proposed last year to ban any business with the Venezuelan government “are now in the House of Representatives” and awaits the same so that they “go to the Senate.”

In the same line, the spokesman of the House of Representatives of Florida, Richard Corcoran, present at the meeting, said that the proposals of Governor Scott will definitely become law on Wednesday.

These are two projects – SB538 and HB359 – that entered the legislative branch in October and that “strictly” prohibit the state and all its agencies from investing in any company that does business with the Venezuelan president’s government.

“People coming from Venezuela are devastated, I see patience, but many have lost hope, it seems a small problem compared to what we have now, but Venezuela means a lot here too,” said one attendee at the meeting.

In response to this intervention, Scott said that “it has to be very difficult to leave your country and come here” and assured that his administration “will continue to do everything in its power”.

“It’s especially painful in a country that was so prosperous 25 years ago,” said the Republican governor, close to President Donald Trump.

Also, another attendee at the meeting asked Scott for actions for “Venezuelan artists, singers and talents applauded in his country” who are now in the United States “going hungry.”

“They are moving to Florida and many do not even have a job, they are nobody here and they have no possibilities,” he said.

Scott recalled that “they have no control over immigration,” but that from their administration “they will do everything they can to help these specific cases.”

“The employment is growing every month, and in Florida not only people from Latin America are coming, but from all of our country, it’s a wonderful thing,” he answered.

One of those present insisted on the influence of Scott to act more forcefully in his Venezuela: “We need the support of the United States, we know of his influence in the White House, the problem will also be in this country, with drug trafficking, for example ”

Scott offered his help to the Venezuelan community although he stated that “many of the ideas they have heard today need governmental action.”