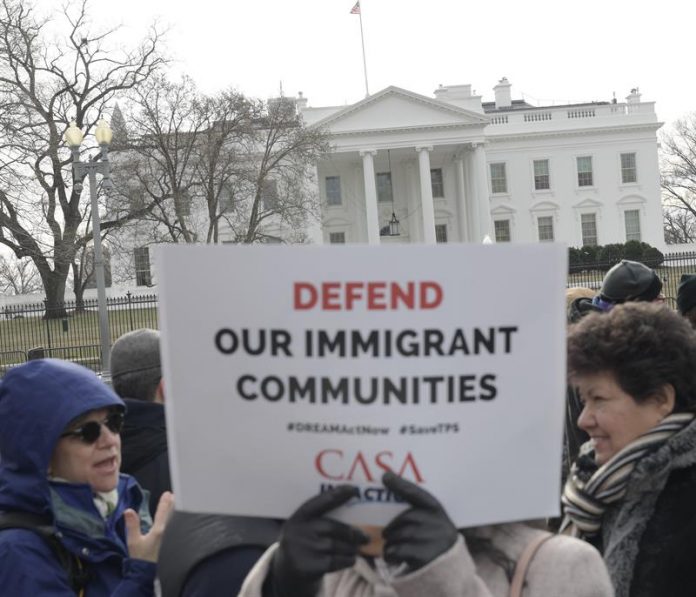 Organizations defending the rights of immigrants denounce that activists who do not have American citizenship are the new objective of the federal authorities to create fear among the undocumented and strike this protest movement.

The actions of agents of the Immigration and Customs Enforcement Service (ICE) against at least four community leaders would confirm this new policy of the Trump Administration to destabilize manifestations of resistance at the national level, according to various groups.

The arrest last week and the imminent deportation of Ravi Ragbir, director of the New Sanctuary Coalition in New York, in addition to the arrests of activists Jean Montrevil, of New York, and Eliseo Jurado, of Colorado, are cases that serve to illustrate the complaint .

“What they want is to instill fear, the administration feels pressured and they can not find a way to shut us up,” said Efe Maru Mora Villalpando, founder of Latino Advocacy and who claims to be in the sights of ICE.

The immigrant from Mexico, aged 47 years and who is in the country illegally, recently received a summons to appear before the federal authorities and explain their immigration status.

Never, he says, has he had contact with immigration authorities since he entered the country with a tourist visa in the 1990s, nor does he have any records with the local authorities of the state of Washington, where he has led a movement to denounce the conditions of detention centers on the west coast of the country.

A case that resembles the Mexican Eliseo Jurado, husband of Ingrid Encalada Latorre and a leader of the sanctuary movement of Colorado, who without having any pending process with ICE was arrested last week in a parking lot after living 30 years in the United States.

According to Pablo Alvarado, director of the National Day Laborer Network (NDLON), going after activists is a dictatorship strategy: “If you intimidate and annul the activist, the struggle will end, and that is what we can not allow. ”

In the sights of the federal authorities would also be local and state officials, as follows from what he said this week in Congress the Secretary of National Security, Kirstjen Nielsen, who confirmed that his agency is studying prosecute those officials who do not cooperate with ICE .

“These threats against the political opponents of the president (Trump) are intended to intimidate us, they are designed to silence us and subjugate us, but they will do the opposite,” California Senate leader Kevin De León said in a statement.

The mayor of Oakland, Libby Schaaf, said for her part to be willing to go to jail for defending the “sanctuary” policies observed by this Californian city.

The rejection is also heard from the House of Representatives, where congresswoman Pramila Jayapal described the persecution of Mora Villalpando as an intimidation against the immigrant community so that it does not exercise its rights.

“They are breaking the laws, they do not want to give explanations to anyone, they have not allowed me access to information about my own case, that is illegal,” said Mora Villalpando, who criticized the “lack of control” in which they are operating. agencies like ICE.

The family of Ragbir, an immigrant from Trinidad and who after his arrest has been transferred to Miami, also denounced that ICE violates its own rules.

The federal authorities will possibly repeat with Ragbir the same steps they took in the case of Montrevil, who was deported to Haiti a few days after being arrested in New York.

“It has to be because I’m part of the new sanctuary movement,” Montrevil said from Haiti in an interview with Amy Goodman of Democracy Now about the reasons for her arrest and detention.

Immigrant advocacy groups say it is time for the community to support its leaders and for more people to emerge into the movement to become a new generation of activists.

“Probably some of us will have to pay with jail or that they will take us away from our family, but I am willing to do it for the good of the community,” Alvarado said.

Despite the risk involved, Mora Villalpando traveled to the capital to join today’s rally in front of the national Capitol, where hundreds of activists exert pressure on Congress and demand an “immediate” solution for the “dreamers”, the undocumented youth who came to the country as children.

“We are not afraid of ICE, we are only fighting for our rights and that is what has made the United States great, and we are part of this community,” said the activist.