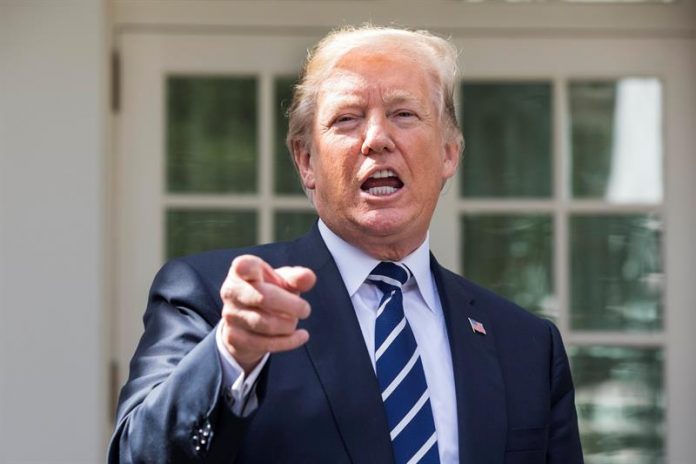 The president, Donald Trump, described Mexico as “the most dangerous country in the world” and said he has never changed his mind about what the wall should be and who should pay it, an issue that has generated an apparent dispute between the president and his chief of staff, John Kelly.

In a series of morning tweets, Trump contradicted Kelly, who on Wednesday said the president was “uninformed” when he made some campaign promises in 2016, and that his opinion of the wall he wants to build on the border with Mexico has “evolved.” ” since then.

“The Wall is the Wall, it has never changed or evolved since the first day I put it in. In parts of it, by necessity, it will look through and was never considered to be built in areas where there is natural protection such as mountains, páramos or rivers, “Trump said.

He also insisted that the wall “will be paid, directly or indirectly, or through a long-term reimbursement, by Mexico, which has an absurd surplus of 71,000 million dollars with the US”.

“The cost of 20 billion dollars is minimal compared to what Mexico gets from the US The North American Free Trade Agreement (NAFTA) is a bad joke!” Said Trump.

The president returned to criticize the trade pact in force since 1994 between the US, Canada and Mexico, a week before the sixth round of renegotiation of the agreement begins.

But what most outraged the Mexican government was that Trump assure, in another tweet, that the United States “needs” the wall to “help stop the massive influx of drugs from Mexico, which is now described as the most dangerous country in the world” .

The Mexican Ministry of Foreign Affairs (SRE) affirmed in a statement that, although it faces “a significant problem of violence, it is openly false that Mexico is the most dangerous country in the world”, since other Latin American nations “have higher homicide rates” .

In addition, the Foreign Ministry stressed that “Mexico will not negotiate NAFTA, or any other aspect of the bilateral relationship, through social networks or the media.”

The Mexican president, Enrique Peña Nieto, arrived almost a year ago to an agreement with Trump not to speak in public about who will finance the construction of the wall on the border, but the American leader has broken that pact several times since then.

Trump’s messages also show an apparent breach with his chief of staff, following his statements made Wednesday to the Democrats of the Hispanic Caucus of Congress (CHC).

“This president has gone through a process of evolution, and I told the legislators who were in the room that they all say things in campaigns that may or may not be fully informed,” Kelly told Fox News after the meeting. .

Kelly added that Trump has been “very flexible” about the wall, and about the promise that Mexico will pay for the project, said: “In one way or another, it is possible that we could get Mexico’s income, but not directly from his government. ”

He added that the White House is considering financing the wall with “things like (the increase in) visa fees and the renegotiation of NAFTA, with the effect that would have on the US economy.

According to several media reports, Trump became “furious” when he learned that Kelly had described his position on the wall in this way, and aired his anger at the chief of staff, a general whom he has always respected enormously.

However, Trump denied today that Kelly had said he was “uninformed” during the campaign, and praised his work.

Meanwhile, the White House deputy spokesman, Raj Shah, said Trump is not angry with Kelly, but with “media coverage,” which “took the comments of the chief of staff out of context.”

“(Kelly and him) have a great relationship, and that goes on,” Shah said.

The episode is part of negotiations between the White House and Congress to reach an agreement that protects tens of thousands of undocumented youth who came to the United States from children, known as “dreamers” from deportation.

The White House has conditioned any agreement on that issue to the approval of funds to build the wall and certain reforms to the legal migration system, and Trump insisted today in a tweet that “if there is no Wall, there is no Agreement.” (efeusa)