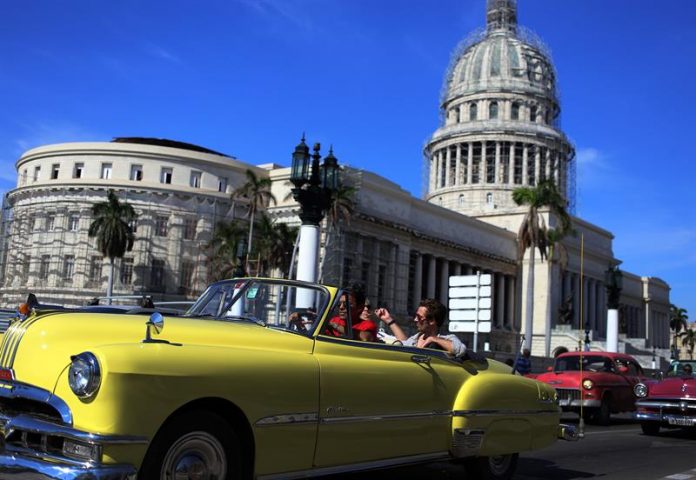 The United States today accused Cuba of knowing how the alleged attacks on the staff of its embassy in Havana occurred and not telling it, while admitting for the first time that it is not certain that it was acoustic aggression.

“We believe that the Government of Cuba has the answer to this and they should be doing more to help us solve it, the Government of Cuba knows what happened, so we would like you to tell us about it and not to happen again,” he said today. Assistant Secretary of State for Public Diplomacy and Public Affairs, Steve Goldstein.

Both he and Deputy Assistant Secretary of State for Latin America and the Caribbean, Francisco Palmieri, acknowledged today that, more than a year after the first recorded attack, the United States does not know who is behind or its nature.

“We still have no definitive answers about the source or cause of the attack, the investigation is still ongoing, the most recent confirmed attack occurred in August 2017,” Goldstein explained.

Palmieri, in a hearing on this crisis in the Senate, maintained on several occasions that the US he has no evidence that Cuban government agents perpetrated the attacks but reiterated that Havana, at least, “failed” in its duty to protect US personnel on the island.

“There were attacks and 24 people were injured, there is no doubt that this happened, we are not satisfied at all with the Cuban government and we believe that Cuba has the answers and they simply do not tell us,” a senior official of the State Department that preferred anonymity.

The Cuban authorities deny having guilt or knowledge of the attacks and claim not to have found evidence of these alleged assaults in the investigation they carried out.
However, both the State Department and the Republican senators and Democrats who participated in the hearing assure that it is impossible for an event of this nature to occur without the government of Cuba knowing, since they consider that “they know absolutely everything that happens “in that” police state “.

In this context, the United States does not consider sending back to the island the officials it repatriated during this crisis, which has left its embassy in Havana at a minimum.

Nor has he indicated that he studies the return of the 17 Cuban officials he expelled from Washington in the wake of this incident.

The State Department, which from the outset described the alleged attacks as “sonic,” admitted for the first time today that it is not sure they were an acoustic attack.

“I do not rule out anything, I am not saying it is an acoustic attack, but we do know that there is an acoustic element associated with them, which can be part of another style of attack,” the deputy director of diplomatic security of the State Department said today. , Todd Brown, in a Senate hearing on this subject.

“What we have clear is that there are 24 injured, what happened and that was deliberate,” he insisted, to announce that in the next few days a council will be appointed to review the case in the Department.

Several senators asked Brown about a preliminary report by the FBI, recently leaked to the press, which indicates that his research in Havana has not found evidence that sonic waves are the cause of the health damage suffered by that group. diplomatic staff and their families.

“Well, possibly they are not acoustic, possibly they used microwave (microwave) or other technology, but it is irrelevant, it is important to know which method was used (…) but at the end of the day we knew there was an attack”, said to Efe Republican senator Marco Rubio after the session he presided over.

Both he and Democratic Senator Bob Menéndez (both Cuban-Americans) asked Palmieri if the issue of the attacks with Russia had been addressed, given the suspicion that the Kremlin might be behind.

Palmieri said he preferred to respond to that question in a session closed to the public and said, to Rubio’s questions, that he has no record that the attacks were the work of hard-line agents of Castroism opposed to the normalization of relations between the United States. . and Cuba. promoted by former President Barack Obama in 2014.