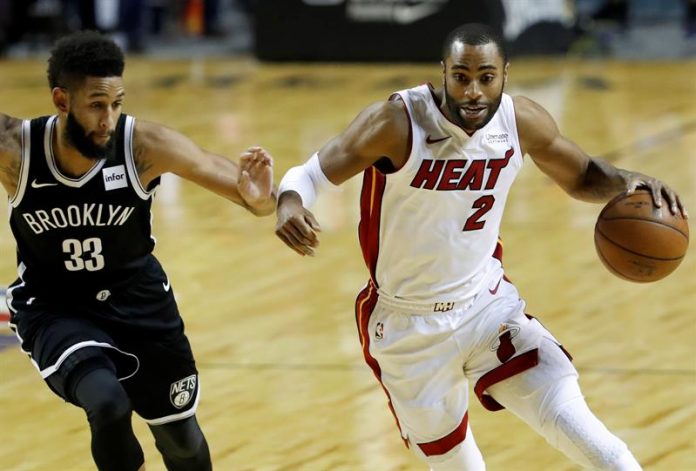 The recovery of the Miami Heat as a winning team returns to be a fact as it happened last season and with his great visitor victory against the Toronto Raptors allowed him to also premiere leadership.

Reserve guard Wayne Ellington scored with penetration when there was less than a second of regulation time and the Heat came from behind to defeat the Raptors 89-90, who cut 12-game winning streak at their Air Canada Center field.

For the Heat (23-17), the victory allows them to score five consecutive wins, the eighth in the last 10 disputed, and they already share the lead of the Southeast Division with the Wizards of Washington, who had a rest day, and are fourth in the Eastern Conference.

Ellington returned to be the winning factor of the Heat winning 15 points, including the basket that decided the victory of the Miami team, which ironically was the only one that got in the second half.

The Heat’s leading scorer was again the Slovenian baseman Goran Dragic with a double-double of 24 points, 12 rebounds and four assists.

While the rookie center reserve Bam Adebayo got a double-double of 16 points and 15 rebounds, the best marks he has achieved as a professional.

Starting center Hassan Whiteside also achieved a double-double of 13 points and 15 rebounds for the Heat, who had lost their five previous visits to Toronto.

The Raptors again had as leader the shooting guard DeMar DeRozan, who scored 25 points, but missed 19 of 29 field goals without being a winning factor.

The base Delon Wright who left the starter in the post of Kyle Lowry, injured, scored 13 points and the Spanish power forward Sergio Ibaka got 11 goals before he was expelled from the game in the third period.

The escort C.J. McCollum contributed 27 points and seven assists that helped the Portland Trail Blazers beat 106-117 at home to the Oklahoma City Thunder in a Northwest Division duel.

The victory was the third consecutive of the Trail Blazers (22-18) that consolidate in the second place of the classification, in which the Timberwolves of Minnesota are the outstanding leaders (26-16).

The Trail Blazers, who started a four-game road trip, got the seventh win in the last nine games they’ve had against the Thunder.

The Bosnian center Jusuf Nurkic got 20 points and eight rebounds that also helped the Trail Blazers.

The Thunder were led by point guard Russell Westbrook, who managed double-double of 22 points and 12 rebounds, while forward Paul George scored 22 points and Carmelo Anthony reached 19 points, but did not avoid the second consecutive loss.

The combination of the experience of German power forward Dirk Nowitzki and the youth of rookie point guard Dennis Smith was the key that allowed the Dallas Mavericks to beat the Orlando Magic 114-99 in a duel of losing conference teams.

Both were combined with 20 goals each that made the difference in the final score of the Mavericks (14-28).

The Mavericks gave their coach, Rick Carlisle, the 708th career victory, which surpasses John MacLeod in 17th place on the all-time NBA list.

Carlisle’s next goal is to match the Gene Shue brand, who has 784 victories.
Coach Wesley Matthews had 16 points for the Dallas team, which achieved its first win so far this year, after the last one it had won was on Dec. 31 against the Oklahoma City Thunder.

The Magic (12-29) were the leading scorer for reserve power forward Aaron Gordon, who contributed 19 points, eight rebounds and two assists.

In duel of equipment with losing mark of the Pacific Division, the Lakers had to five players with numbers of two digits, including the Cuban American pivot Brook Lopez, that contributed other 18 so many.

While the rookie baseball player Lonzo Ball got a double-double of 11 rebounds, 11 assists and recovered five balls, but did not have his best inspiration encestadora to contribute five points after scoring 2 of 10 field goals, including a triple of seven attempts .

The Kings had the attack of reserve guard, the Serbian rookie Bogdan Bogdanovic, who scored 19 points and four assists that left him as sixth player.