The temple of the Santa Muerte de Tultitlán, in the central State of Mexico, celebrated today ten years with hundreds of devotees who paid homage to the imposing figure that dominates the space, the image of the “White Girl” largest in the world.

With a height of 22 meters and a base of 6 meters, a gigantic statue stands in this municipality adjoining the Mexican capital.

It is made of fiberglass, wears black and extends its arms. They excel their skeletal hands and skull.

The image, which can be seen from afar in this area of ​​low real estate, is undoubtedly scary. But for its devotees it is an oasis of hope, peace and love.

“It is a beautiful, ancestral cult, and I am proud to belong to it because everyone here is welcome, they are seen as brothers, it does not matter the color of their skin, their social status or their sexual preference. “Enriqueta Vargas, the” godmother “of the temple, told Efe.

Vargas today wears a peculiar dress with Aztec reminiscences. And at the entrance of the enclosure he received a chalice with incense to a pilgrimage of a hundred people.

The procession, with several images of Santa Muerte, was led by a series of Aztec dancers, who played huge conch shells and gave testimony of the religious syncretism of this cult reviled by the church.

The cult to the Santa Muerte has an enigmatic past and according to diverse investigators goes back to 1795, when the natives worshiped a skeleton in a Mexican town.

It was kept secret for almost two centuries, and in the capital began to proliferate in the forties of the twentieth century.

The outbreak of the phenomenon, which claims to have some 12 million faithful worldwide, occurred in the mid-nineties.

From the first hour of the morning this temple, which opens every day, was today a hotbed of devotees from all over the Mexican territory such as the states of Veracruz, Hidalgo or Guadalajara.

They greeted the great image, knelt down, prayed and took pictures with it, and also visited the niches around with such curious figures – for the Church, blasphemous and demonic – as an image of the Holy Death with a Jesus Christ dying in arms.

Some of the parishioners were in procession and others on their own as Lito Fregosi, arrived from Tampico (Tamaulipas), about 475 kilometers from the capital.

At 38 years old, she has been venerating her “skinny girl” and carrying in her arms a figure of about 50 centimeters to which she gave kisses from time to time.

“She helps me, she takes care of me, she is a mother,” said the man who began to worship him as a teenager when he hid from his parents and worshiped her with a tiny image of her that he hid in a box of matches behind him. Of fridge.

Today he has more than sixty images in his house and his whole family is also devoted, one more proof of the magnetism of this idol.

The prayer begins and each person stands before their figures. They are of all sizes and are full of offerings; apples, sweets, tobacco, tequila, chocolate and whatever is provided.

Teresa Hernández goes with a good part of her family. Even a great-grandson of months that will be baptized in this place in the next few days, which also celebrates weddings.

Although Tultitlán woke up today with four dead in a shootout, the atmosphere in the temple of Santa Muerte Internacional-a congregation with ramifications throughout Mexico-was peaceful and familiar.

“He did me a miracle because my granddaughter had a motorcycle accident and they were going to amputate a leg, but I asked him and he helped me a lot,” Teresa Hernández told Efe.
Teresa had six figures with her and her story shows the link that is made to this cult of the underworld, including drug trafficking.

She was initiated into this idol by some friends of her son, who were in prison and gave her a picture of the Most Holy.

“Now all the little criminals have their Santa Muerte, but we are not bad,” said the woman, who said she could “heal” through the “potential” that confers on her.

This same temple has a past stained with blood. It was opened by Jonathan Legaria Vargas, a radio preacher known as Comandante Pantera, a decade ago.

But the young man was shot to death shortly after, and it was his mother Enriqueta who took over as leader of the cult.

La Santa Muerte is also venerated by the homeless, marginalized and minorities. Cristal is a 29-year-old trans girl and has six being a devotee, entered the cult through a friend also transsexual. 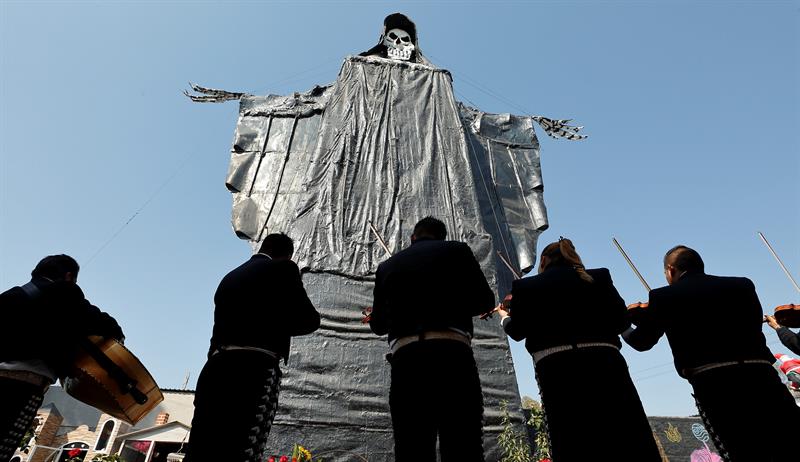 Although many of the devotees of Santa Muerte remain Catholics, the cult also embraces those who have moved away from the church.

Like Berta, a 60-year-old woman who confessed to Efe that Catholicism has been changing this cult for months. “The Church only thinks about money, about pure money,” he criticized.

By Lamar Smith.-With a majority in both the House and Senate and control of the Oval Office, Democratic leaders are excited about the prospect...

Defender Dexter Fowler homered for the third time in a row and the St. Louis Cardinals made another 9-2 win over the Cincinnati Reds. The...

The National Hurricane Center (NHC) of the USA Hurricane Florence is expected to reach Category 3 again today while approaching Las Carolinas, in the...

Genomic medicine benefits the detection of diseases and treatments