The Spanish Montenegrin power forward Nikola Mirotic regained his best inspirations and again was the leader of the attack of the Chicago Bulls that won at home 106-115 to the Bucks of Milwaukee.

Mirotic, who went on reserve, contributed 24 points in the 28 minutes he saw action with 9 baskets of 18 field goals, including the 4 triples of eight attempts he scored, and 2 of 4 from the line of personnel. 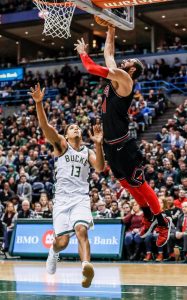 The former Real Madrid player also had a leading role in the painting by capturing eight rebounds – defensive six – gave an assist and committed a personal foul.

Base Kris Dunn provided a double-double of 20 points, 12 assists, four rebounds and four turnovers that also helped the Bulls win (11-22), which broke a two-game losing streak.

While the escort Justin Holiday added 15 points for the attack of the Chicago team.

Miami, .- The school ship of the Spanish Navy Juan Sebastián Elcano arrived on Sunday in Pensacola (northwest Florida), where he will remain until...

Trump adviser sees possible that tariffs to Mexico do not apply

The chief commercial adviser of the White House, Peter Navarro, said today that "tariffs may not come into force" given that Mexico has already...

The Hurricane Maria that last September swept Puerto Rico caused losses for agriculture and livestock of more than 2,000 million dollars, about 5,000 dead...

Washington, .- More than 350,000 followers of the series "Game of Thrones", furious with the direction the script has taken in the eighth and...

Obama, Bush and Clinton Volunteer to Get Publicly Vaccinated Against COVID-19