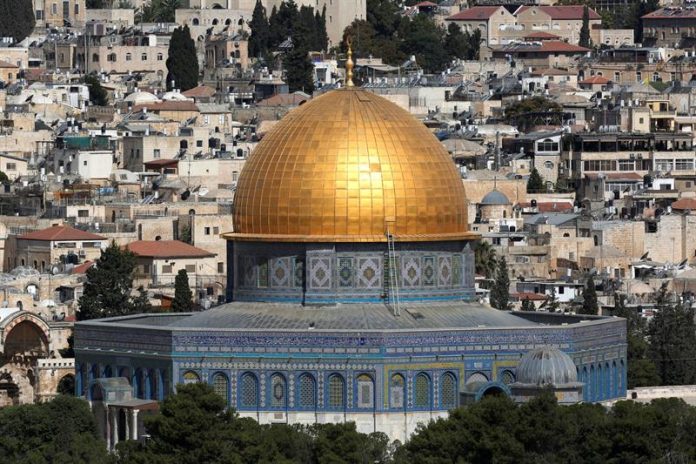 The president, Donald Trump, plans to announce on Wednesday his recognition of Jerusalem as the capital of Israel and order the embassy to move there, an announcement that could ruin any prospect of a peace process mediated by Washington.

Trump will give at 1:00 pm on Wednesday (18:00 GMT) a speech to announce his decision on the status of Jerusalem, according to the White House today.

The president will say that the United States “recognizes Jerusalem as the capital of Israel,” a step that it conceives as the admission of “a reality, both historical and modern,” said a White House official, who requested anonymity.

“The president believes that this is the right time and the right step to take, especially with regard to his hopes that a peace agreement can be reached,” a second official added at a press conference.

However, Trump will recognize “that the specific borders of Israeli sovereignty in Jerusalem will be subject to final status negotiations” with the Palestinians, and will continue to support the “status quo on the Temple Mount” or Temple Mount, located at Palestinian part of the city, according to the first official.

The United States will thus become the only country in the world that recognizes Jerusalem as the capital of Israel, where no nation has its embassy because, after the Israeli annexation of the eastern part of the city in 1980, the UN called the community International to withdraw its legations from the Holy City.

Although Israel considers Jerusalem its capital, the sovereignty of the country over the eastern part of the city (East Jerusalem) is not recognized by much of the international community, and the Palestinians want to establish there the headquarters of their future state.

Trump will also order the State Department to “start a process” to move the Washington embassy to Israel to Jerusalem, but that process will take at least “3 or 4 years,” according to officials.

“There are about 1,000 people working in the embassy in Tel Aviv, and we do not have a facility that can accommodate them in Jerusalem, it will take time to find a place, make sure it is safe, design a new embassy and build it,” the source explained.

The president spoke today with five leaders of the region to communicate their decision: the Israeli Prime Minister, Benjamin Netanyahu, the president of the Palestinian National Authority, Mahmud Abbas, King Abdullah II of Jordan, the President of Egypt, Abdelfatah Al Sisi, and the King of Saudi Arabia, Salman bin Abdelaziz.

Its four Arab interlocutors expressed concern about the possible measure, which would break the consensus of the international community on the status of Jerusalem.

During the 2016 election campaign, Trump promised that the embassy in Israel would be moved to Jerusalem, and the White House said in recent days that the question is not whether the president will order that change or not, but “when” it will do so.

A US law of 1995 urges Washington to move its embassy to Jerusalem, but that measure has never been implemented because all presidents since Bill Clinton have periodically postponed its implementation.

Trump did the same as his predecessors last June, and this Wednesday he will postpone the implementation of the law for six more months, because there is still no facility in Jerusalem ready to become an embassy, ​​according to officials.

It is not clear what Trump intends to achieve with this measure, which puts at risk the future of any peace effort mediated by Washington at a time when his son-in-law and adviser, Jared Kushner, was finalizing the details of his plan for peace in the East. Next.

“The physical location of the US embassy is not an impediment to peace,” argued the first official who spoke to the press.

But the future of Jerusalem is “the most sensitive and volatile issue in the peace negotiations,” according to Aaron David Miller, an analyst who advised the Clinton administration in the peace process of the 1990s.

According to Miller on the CNN website, the decision on Jerusalem is due to “a combination of Trump’s frustration about having to postpone again (the application of the law) and about failure to fulfill his promise.” election, and his stubborn desire to do something that his predecessors have never done. “

Julen Lopetegui: “Real Madrid is always dangerous and in this situation even more so”