The Puerto Rican singer Wisin is honored that his former duo partner, Yandel, has participated in “Victory”, his fourth solo album and in which he opted to tackle a “very personal” project in which other rhythms have a place beyond Reggaeton

“What a blessing that Yandel wants to work with me and we can once again give the audience that great sound of Wisin y Yandel,” he said in an interview with Efe the musician about the collaboration in the songs “Hacerte el amor” and “Todo será en la disco”.

On a possible return of the duo Wisin and Yandel, he said that in music you can not “plan” what is going to happen, because “powerful things are spontaneous”, but he asked the public to be “well aware” because 2018 will be a year full of “big projects and big surprises”.

In 2018 he arrives with “Victory”, an album that combines recently released songs, such as “Everything starts on the album”, published only a week ago, or “Move Your Body”, together with Timbaland and Bad Bunny, with hits already established in the lists like “Vacations” or “Escape with me”.

“There are many fusions in this album, many things happen, it surpassed my expectations,” said Juan Morera, the singer’s real name, who noted that the collaboration of another great reggaeton, Daddy Yankee, contributed to the album the “essence of the movement”.

Without wanting to lose the essence of the urban genre, but with the desire to provide the public with something “cool”, “Victory” is presented as a “complete and varied” album where each musical fusion “is not an invention”, but an attempt to evolve so that people “hear big and different things.”

The variety of the album is what, according to Wisin, “makes the project great”, in which 10 of the 16 tracks are collaborations with artists from the urban, pop and trap genres such as Nicky Jam, Timbaland, Bad Bunny, Daddy , Don Omar, Ozuna, Zion & Lennox or the Mexican Mario Domm.

“I think that each theme contributes to the project being great, in a project like this one can not highlight a single theme and the others that are mediocre, we have to make a complete, varied album,” said the musician who is known as ” Survivor “, in reference to the title of his first solo album, 2004. 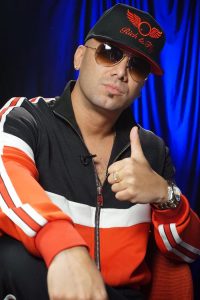 In this line, he highlighted the collaboration of producer Timbaland, which allowed him to create songs such as “Move Your Body”, as well as two figures “so great in Latin and urban music” such as Daddy Yankee and Nicky Jamm, mergers that result in the “good result” of the disc.

The name of the album is “very personal”, and evokes that of his daughter Victoria who died last year, a name that permeates the record of the need to “keep climbing and growing when you fall”.

Precisely the album begins with the song “Victory”, which, far from being a song as such, is a poem by the Panamanian street poet Gallego recited with a background percussion.

“I wanted to convey how I feel, who I am, and to think that when you are going to fall down a cliff your courage and your work team make you go ahead and bring the public a good job,” he revealed.

Wisin sees his music as a sort of balm for a year in which “so many tragic things have happened in his land,” in reference to the devastating passage of hurricanes Irma and Maria through Puerto Rico, and he is sure that people “are going to dance with this record and forget the problems “.

The Puerto Rican artist said he “did not sleep” during the two years of album production, in an effort to make music “from the heart”.

This discipline, he said, has brought great success this past year thanks to “Escape with me”, “Vacation”, the theme with Jennifer Lopez “Love, love, love” or the song with Chayanne “What have you done to me”.

In his opinion, this fusion of styles in which he has participated with these artists “means growth” for music and he congratulated artists like Jennifer Lopez, who are not from the urban movement, who have dared to do “different things”.

For the singer, hits like “Vente Pa ‘Ca”, by Ricky Martin and Maluma, or the collaborations of Justin Bieber or Enrique Iglesias with urban artists are “very necessary”.

The Spanish tennis player Rafael Nadal achieved his passage to the US Open semi-finals on Wednesday after beating Russian Andrey Rublev 6-1, 6-2 and...

It will discuss the development of a new Constitution, a reconciliation process and the holding of new elections Former President Henri Konan Bédié, who has...

Berkshire Hathaway, the investment vehicle of Warren Buffett, the 90-year-old investor known as the 'Oracle of Omaha', has reported this Monday that its subsidiary...

The Venezuelan-Canadian singer Aiona Santana surprises in the urban genre with her new single "Fronteo", whose video was filmed in Havana, Cuba The song is...