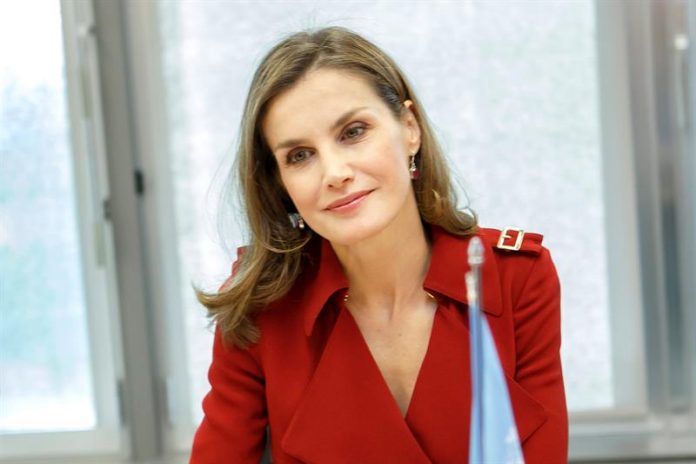 Queen Letizia arrived in Mexico today to participate on Monday and Tuesday in the World Summit of Leaders against Cancer (WCLS) and attend a meeting at the headquarters of the Mexican Red Cross to be interested in their humanitarian work on the occasion of the two earthquakes that They shook this country in September.

The wife of King Felipe VI of Spain will also be received by the President of Mexico, Enrique Peña Nieto, at the residence of Los Pinos before attending the official dinner of the WCLS on Monday.

The queen, who is president of honor of the Spanish Association Against Cancer (AECC), will speak on Tuesday at the plenary session of the summit, which will be held at the Mining Palace.

The summit will also involve the Spanish Minister of Health, Social Services and Equality, Dolors Monserrat, who accompanies Mrs. Letizia on this trip.

Organized by the International Union against Cancer and the Mexican National Institute of Cancer, the summit will gather more than 300 representatives of states, public health policies and pharmaceutical companies, which will debate proposals so that by 2025 it has been reduced by 25 the mortality caused by this disease, according to the objectives of the UN.

Since she is queen, Letizia Ortiz has participated in six international activities related to cancer, the first of which was in Morocco in July 2014, less than a month after the proclamation of Felipe VI, when she visited with Princess Lala Salma the National Oncological Institute of Rabat.

In September 2015, he went to Washington to know the headquarters of the National Cancer Institute (NCI) of the USA, on the occasion of an official trip of the King and Queen of Spain to that country, and a year later, in October 2016, he traveled to Paris to intervene with the president of France, François Hollande, on the opening day of the World Cancer Congress.

A month later, during the first visit of State of the Kings of Spain to Portugal, he met with representatives of the Portuguese League against Cancer in Oporto, city to which he returned last March to intervene in the opening of the VII European Conference “Tobacco or Health”.

Also during the State visit to Japan that took place at the beginning of April, the Spanish queen dedicated her only solo activity to learn about the advanced personalized treatments against cancer and rare diseases developed in Tokyo by Keio University Hospital.

The official activities of Queen Letizia in Mexico will begin on Monday in the first hour with a working visit to the national headquarters of the Mexican Red Cross, during which she will be interested in the work of humanitarian aid in favor of those affected by the earthquakes that shook the country on September 7 and 19.

The Red Cross contributed with the work of 1,200 people, 25 rescue units and 130 ambulances to help those affected by these earthquakes, to whom 3,662 tons of humanitarian aid were sent.