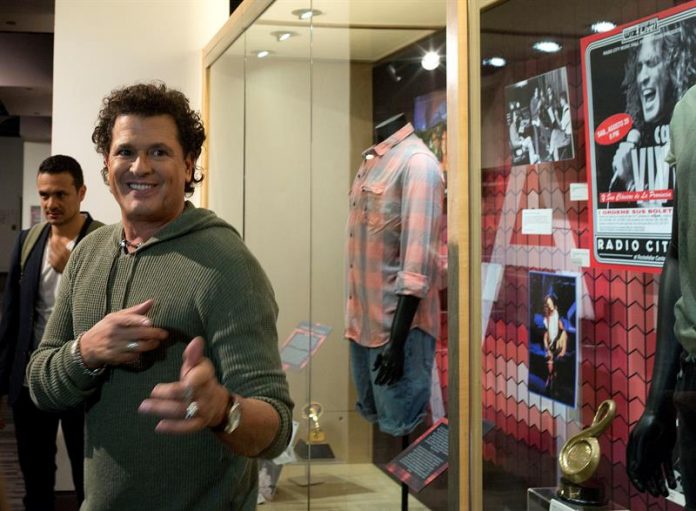 The Grammy Museum today presented the exhibition “Deep Heart: Roots, Rock & The Music of Carlos Vives” (Deep Heart: roots, rock and music by Carlos Vives), an intimate look at the career of the Colombian, a pioneer of integration of indigenous sounds and vallenato in popular music.

“It’s something wonderful,” he conceded in a statement to a small group of media, including Efe.

“I never imagined something like that, I have never really expected anything, I only believe in my heart, and this is the opportunity to tell my story and show the music of my country,” he added at this Los Angeles museum (USA). UU.).

The gallery contains the costume that Vives wore in his first telenovela (“Escalona”) and his first Grammy (from 2001, to the best traditional Latin album, for “Déjame Entrar”).

“That work generated many comments about the sound, they called it the ‘Colombian Pop’ or ‘Tropi Pop’ movement, and it attracted the attention of many Colombian artists from different regions who today work with those traditional patterns mixed with modern sounds,” Vives said. , citing colleagues such as Juanes or Fonseca.

In the Museum you can also find his Latin Grammy of 2015 for the best tropical contemporary album (for “El rock de mi pueblo”) and objects that appear in the video of “La bicicleta”.

Also, the notes and the letters that he wrote by hand during the recording of the album “Corazón profundo”, of 2013, are appreciated.

“It’s a journey from my roots in folklore to the search for modernity, I wanted to be a local Elvis, with very humble beginnings, but I always wanted my shows to be brilliant,” said Santa Marta.

“I am satisfied with my path, but it is an inexhaustible road, new sounds are coming in. I can still see myself working for many years,” confessed the 56-year-old singer, who released his first album, “Por fuera y por dentro”, in 1986.

“There are many stories yet to be told and much to discover, we have just opened a very special universe,” said the artist, who took the opportunity to express his wishes for peace in Colombia.

“We have to agree to get a country with more equity and in which we are represented, we must heal the wounds and the guerrillas are over,” he said.

This show about the winner of two Grammys and 11 Grammys Latinos will remain open until November next year.

“It is an absolute honor to be able to pay homage to one of the most influential Latin artists and music in Colombia through this exhibition,” said Nwaka Onwusa, organizer of the exhibition.

“Carlos has helped shape the new Colombian and Latin American sound,” he added.

For his part, Scott Goldman, executive director of the museum, said that Vives has had “an enormous impact on the music of Colombia and the US,” and stressed his humanitarian efforts through the Rio Grande music school.

The students of this center, between six months and 12 years old, receive fundamentals of music and instrumental practice to achieve “a balance between theoretical and playful learning, individual interpretation and collective practice”.

Vives released their new album three days ago, entitled “Vives”, a work that has 18 songs and is full of “stories and urgent messages”.

“I’ve been collecting experiences without losing the essence, today we think about how to make a song that will have more views, more ‘likes’ and go to sound more on the radio … I think of the album, telling stories” , the artist recently told Efe.