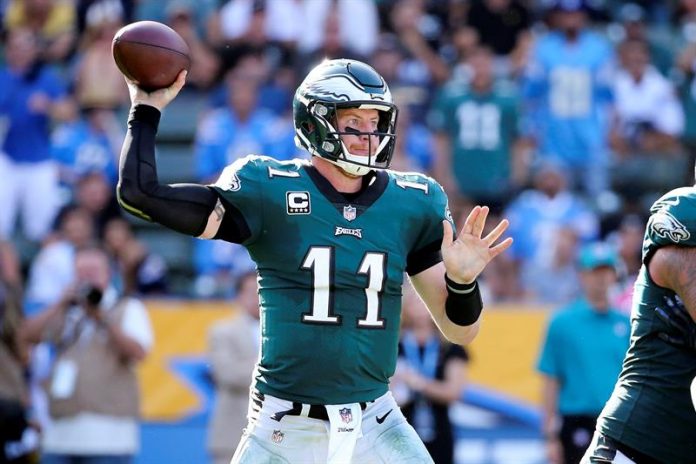 The Philadelphia Eagles maintained their leading role in Week 9 of the National Football League (NFL) to get the seventh consecutive win, which also leaves them with the best mark of the competition.

The New Orleans Saints were not left behind and added their sixth consecutive victory, while in the individual game, the runner Adrian Peterson and quarterback Eli Manning got personal marks.

The Eagles (8-1) won one of the best defenses in the league and got their seventh consecutive victory, entering their week off with the best record in the league.

Wentz completed 15 of 27 passes for 199 yards with four touchdowns.
Another quarterback, veteran Drew Bress, completed 81.2 percent of his passes for 263 yards and two touchdowns in a 30-10 victory over the Tampa Bay Buccaneers.

The Saints (6-2) extended their winning streak to six and clinched the lead in the South Division of the National Conference (NFC).

The Buccaneers (2-6) continue without win in games outside their field, worsening their record to 0-4, and added their fifth consecutive loss.

Also, passer Marcus Mariota threw for 218 yards and two touchdowns in the Tennessee Titans’ triumph, which outscored the Baltimore Ravens 23-20.
The Titans (5-3), who got their third consecutive victory and remain leaders in the South Division of the American Conference (AFC).

The Ravens (4-5) have lost three of their last four games.
Peterson scored a career-high 37 carries for 159 yards and quarterback Drew Stanton threw two touchdown passes in the Arizona Cardinals’ 10-20 victory over the San Francisco 49ers, who still do not know the win.

Peterson, 32, in his third game for the Cardinals, had the most carries for a player in his 30 years, surpassing the 100-yard mark for the second time since he was acquired in a trade of the Saints. last month.

The victory was the fifth in six games for the Los Angeles team, whose 6-2 start at the start of the season is the best in the franchise since 2001 when they finished the season with a 14-2 record.

Manning became the seventh quarterback in the NFL to reach the 50,000-yard mark in his career when he sent a full pass to wide receiver Sterling Shepard in the fourth quarter.

Running back Ezekiel Elliott advanced for 93 yards, two for scoring, after getting the six-game suspension over him postponed, and the Dallas Cowboys defeated the Kansas City Chiefs 28-17.

Elliott ran two yards in the third quarter to get the ball to the end zone.

But this time, with 93 yards on the ground, he saw a broken streak of three consecutive games with at least 100 yards.

Elliott received an emergency order from a New York court on Friday, stopping the suspension for alleged domestic violence.

In other Sunday Week 9 results, quarterback Cam Newton ran for 86 yards and a score in the Carolina Panthers win, which had to overcome a 10-point deficit to defeat 20-17 at Atlanta Falcons

Defensive Jaydon Mickens returned 63 yards a punt to the end zone and the Jacksonville Jaguars beat the Cincinnati Bengals 23-7 in a match that was characterized by a fight in the middle of the field.

The match had the unfortunate moment of a fight in the middle of the field, when the receiver of the Bengals, A.J. Green, and Jaguars cornerback Jalen Ramsey, engaged in a fight that led to the expulsion of both.

When he had finished a play in which Green was expecting a pass that never came, he pushed Ramsey aside, who he threw to the grass, so the Bengals player got up, grabbed him by the neck, sent him to the ground and threw several hits to the helmet.

Quarterback Kirk Cousins threw for 247 yards, including a series of 70-yard, 35-second plays that were crowned when running back Rob Kelley advanced one yard to score and the Washington Redskins beat the Seattle Seahawks 14-17, losing the undefeated at home.

While passer Jacoby Brissett threw two touchdowns and kicker Adam Vinatieri scored two field goals in the Indianapolis Colts 14-20 local victory over the Houston Texans, who immediately felt that the injury had left rookie quarterback Deshean Watson, who will not be able to play again this season with a cruciate ligament fracture in his right knee.