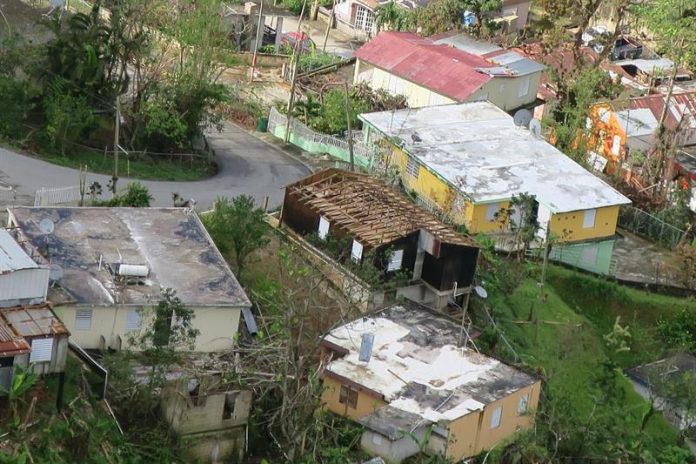 Puerto Rico presents, a month after the passage of Hurricane Maria, a devastating panorama with 80% of the population without electricity, water shortage, poor roads and the sense that this disaster revealed the poverty of the interior of the island and lack of foresight.

Maria, the hurricane that will be recorded in the collective memory of Puerto Ricans, hit this island of 3.4 million people today a month, a territory linked to the United States as a Commonwealth that tries to recover very slowly and waiting that Washington send funds as the only way to get ahead.

The governor of Puerto Rico, Ricardo Rossello, said at a press conference that the damages caused by the hurricane are, according to estimates of third parties, about 90,000 million dollars, a figure that it is difficult to imagine but that is translated in a massive destruction that was fattened especially with the interior and mountainous area.

“The situation is atypical and extraordinary, so it must be treated,” said Rosselló, after insisting that what is needed now is for the Congress in Washington to treat Puerto Ricans like other US citizens.

The governor traveled on Thursday to Washington in search of Congress to approve a requested $ 4.9 billion aid that the local executive needs to simply operate, since his financial situation is hopeless with no liquidity beyond this month.

Puerto Rico, before the passing of Hurricane Maria, was bankrupt and sunk in a restructuring process ordered by a federal court because of an unpayable debt of 70,000 million dollars, so that the cyclone supposed the knockout of its finances one tax collection was now completely disrupted.

The hurricane left a gloomy picture with 250,000 houses totally or partially destroyed, an unquantified number of people who do not work because businesses and businesses have not opened and the forecast that 40,000 Puerto Ricans will pack in the coming months, preferably towards the state of Florida in the USA.

The official figures today, 4 weeks after the hurricane, are that about 80% of the population lacks electricity, a percentage that speaks for itself of the sad prospect of Puerto Ricans.

The reality of the situation is very different if you take as a reference the capital, San Juan, or the interior, where even today it is very difficult to move through the road cut because of the massive fall of trees and electricity poles.

Complaints continue to come about the lack of water and food in the inland municipalities, where at least 50% of the homes are poorly built or built without the required permits.

This inland population still has problems receiving supplies for a slow distribution in some cases that some attribute to the management of municipalities.

Telecommunications remain a problem with about 40% of people without mobile phone service and 30% without water, a month later.

“Another day that there is no bottled water,” Efe Luis Santos, 32, complained bitterly at a supermarket in Santurce, the main district of the capital, a sample of how everything on the island advances after the hurricane, slowly .

“Now I do not have a job and I do not know what’s going to happen in the future, but the thing looks bad,” says Santos, an auto parts store employee in San Juan who has not opened like many other businesses in the face of theft. .

He has relatives in Jayuya, a municipality in the interior, where, with problems, he was able to arrive to find a total destruction of what he says is strongly impacted.

US President Donald Trump visited the island a few weeks ago to give support to Puerto Ricans, although some comments about the “disruption” of the budget that would cause the expenses of the aid did not sit well.

The United States, however, maintains about 15,000 military and federal agency personnel on the ground in unprecedented relief operations.
There are complaints of health problems and it is about verifying an outbreak of leptospirosis, a disease associated with standing water.

The governor has set a goal that by mid-December, 95% of the population will have electricity before the initial announcement of the executives of the state energy company of total recovery of the service in 9 months, a term that threatened a massive exodus in search of minimum living conditions outside.