\ The day of the League Championship phase of the majors left the Puerto Rican Javier Báez as the outstanding slugger, after he sent the ball to the street twice.

While Gary Sanchez drove in two runs and put the New York Yankees to a win to move to the World Series.

Baez hit a pair of homers, Venezuelan catcher Willson Contreras added one and the Chicago Cubs beat the Los Angeles Dodgers 3-2 to lessen the disadvantage in the National League Championship Series.

With their triumph the Cubs, defending champions of the World-wide Series, avoided the elimination by “sweep” and also put numbers of 1-3 in the Series of Championship of National League that is played to the best of seven.

The Puerto Rican, who put his .222 average with the chip in the final phase, started the punishment in the second inning uncontrolled shipments of starter Alex Wood, with no people on the way, when there were two outs in the entry, sending the ball to Waveland Avenue.

Báez, who was 0 of 20, returned to punish Wood with his lap in the fifth, also solitary, with an out. 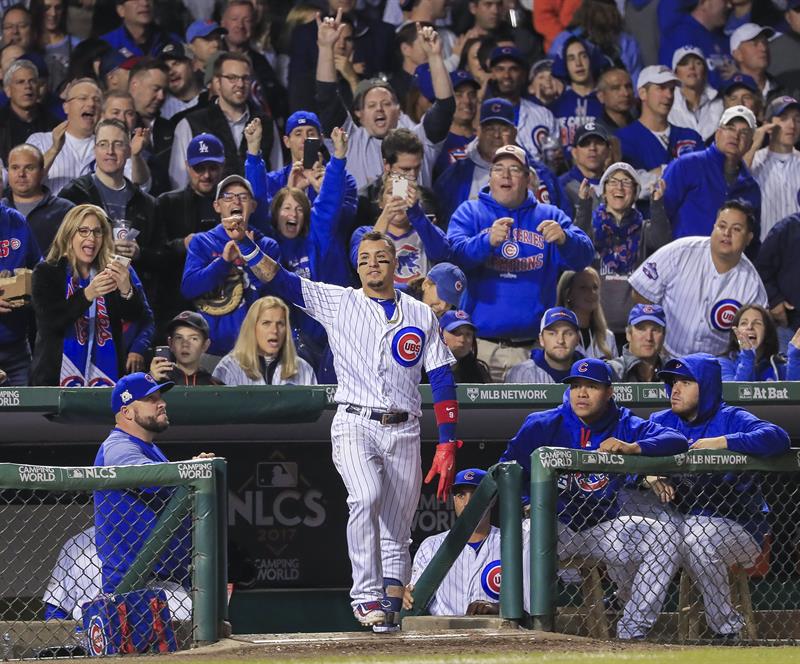 No player had hit two home runs in the finals since Alex Gonzalez did in the second game of the National League Championship Series against the Miami Marlins in 2003.

His attacking partner, Contreras (1), sent the ball to the street in the second episode against Wood, with no runners ahead, with an out at the entrance.

Contreras hit 1 of 3, towed one, scored one and put in .214 his average with the tolete, in addition to doing a great defensive work that also made the difference in what was the beginning of the triumph that opens the way to the possible comeback .

By the Dodgers, Cuban ranger Yasiel Puig hit 1 of 3, and his compatriot catcher Yasmani Grandal was 0 of 1, but this time they could not be the Dodgers’ winners, who are still thinking about the World Series.

In the duel that took place in New York, Sanchez towed two races and the Yankees defeated 5-0 to Houston Astros and are to a triumph of happening to the “Classic of Autumn”.

Sánchez hit single tug and in the seventh episode he hit solo four-cornerer to become the most productive slugger on his team, with two RBIs.

Sanchez hit twice on four trips to the batter’s box and drove in two runs and scored one, leaving .167 with his pick.

The Dominican, who surpassed the serpentine of the relay Brad Peacock, sent the ball all over the left garden, making fly the ball 416 feet (126 meters).
In the fifth episode he hit single on the left and pushed the career of designated hitter Chase Headley.

Sanchez had 1 of 16 with seven strikeouts in the series and 0 of 8 with 6 strikeouts against Keuchel overall.

His compatriot second baseman Starling Castro scored a run in the second inning when he was towed with an unstoppable first baseman Greg Bird.