Installation with white flags on the US-Mexico wall taxes immigrants

An artistic installation based on a hundred white flags placed on the sides of the wall dividing Tijuana (Mexico) and San Diego (USA) pays homage to the “spirit of peace” with which immigrants cross the border.

The author of the idea, the artist Betsabeé Romero, told Efe that the anti-immigrant rhetoric and the proposal to build a border wall that promotes the current administration of the White House motivated her to create the installation “Tu huella es el camino, tu bandera is of peace “, which was inaugurated today.

“Our migrants have made their way and that path has always been peaceful, it has been a path traced with their hands, with their work and their workforce,” said the Mexican.

Each of the hundred flags, fifty of which have been nailed to the US side and the other fifty on Mexican soil, is accompanied by a shoe last, which represents the journey of the immigrants in search of the so-called “American dream.”

Romero said that the idea came after a shoe factory in Mexico closed its operations and opted to donate the iron to give them an artistic use, which fit with their plans to make a facility at the border.

“I did not really have permission or logistics and everything has been done with the magic of people helping us,” he said. 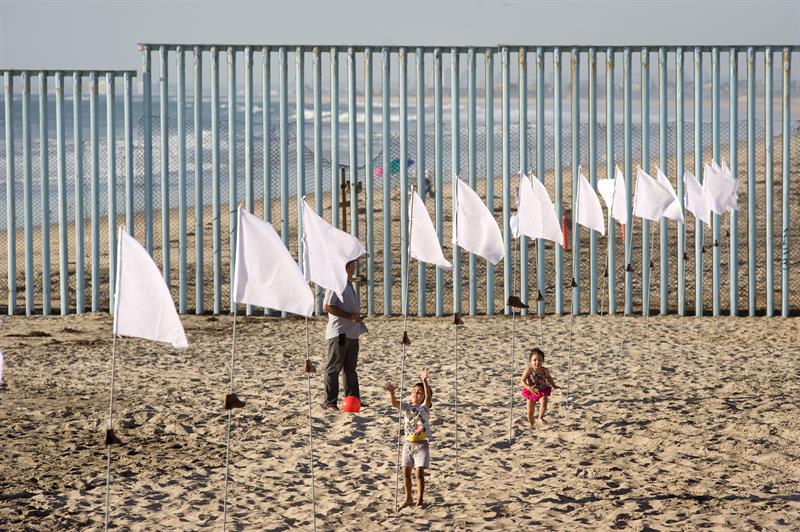 The next stop will be at the border between the Mexican city Agua Prieta and Douglas, in Arizona, according to the artist.

Share
Facebook
Twitter
Pinterest
WhatsApp
Previous articleJames Harden: “McHale is a clown and he never taught me anything to be a leader”
Next articleMore than 10,000 people arrived from Puerto Rico to Florida in the last three days

Miami, .- Dozens of activists of civil and religious groups protested this Sunday in front of the center for immigrant children of Homestead, south...

The unemployment rate in the United States rose to 3.9% in December, compared to 3.7% in the previous month, the government reported today. The US...

The Spanish Jon Rahm has been placed as leader of the CareerBuilder Challenge, tournament of the PGA Tour of golf that is played in...

More than 8,900 dead and more than 218,000 infected worldwide by the coronavirus pandemic

The United States overtakes South Korea and France and stands with nearly 10,000 infected people The pandemic of the new coronavirus originated in the city...