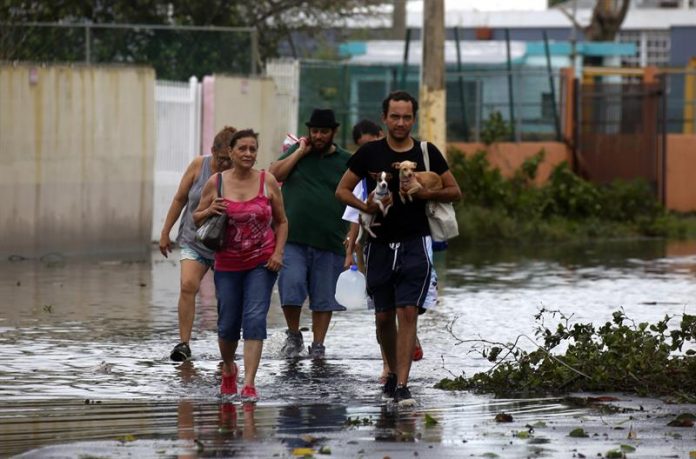 The “humanitarian” cruise that Royal Caribbean organized to bring help and evacuate people affected by hurricanes Maria and Irma in the US Virgin Islands and Puerto Rico docked today at the Everglades port in South Florida.

Numerous people came to greet the approximately 3,800 passengers of the “Adventure of the Seas”, including officials from consulates such as Spain in Miami, who were present to help their compatriots.

Some were greeted with shouts of “Puerto Rico stands up” by their relatives and friends.

About 50 of the passengers of the ship, which has a permanent base in the port of San Juan, are Spanish or Puerto Rican with dual nationality, American and Spanish, told Efe sources of the Consulate General of Spain.
Francisco Garrido, a 40-year-old dual-accountant who left Puerto Rico with his family on this boat last Thursday, told Efe that he is “very grateful to Royal Caribbean.”

“We went from living in an unsustainable situation to being treated like kings,” said Garrido, who feels “very sorry” for leaving Puerto Rico and intends to return to assist in the reconstruction, when he leaves his wife and two daughters in Boston , in the house of some relatives.

According to his account, his “priority was to leave the island” because of his daughters. The lack of food – “supermarkets work in Venezuela” -, water and electricity, the fear of falling ill in a country with “collapsed hospitals” and “insecurity” weighed on the “hard decision” to leave Puerto Rico.

The company Royal Caribbean decided to suspend the cruise that the “Adventure of the Seas” planned to do from September 30 to dedicate the ship to humanitarian tasks in the wake of the disaster caused last month by Hurricane Maria in Puerto Rico and the Virgin Islands only a few days after the passage of another high-intensity cyclone, Irma.

The ship carried cargoes with aid to St. Croix, St. Thomas and Puerto Rico, and on each of those islands collected people affected by Maria, including tourists who were stranded due to the hurricane.

Royal Caribbean has helped passengers on this cruise to make arrangements with airlines so that those who do not stay in South Florida can travel to their final destination.

Puerto Rico was devastated after the passage of Maria, which landed with Category 4 winds, which destroyed thousands of buildings and infrastructure, such as the electrical system, and heavy rains that flooded wide areas.

The official number of fatalities is 16, but other sources estimate that they are around 30.

In addition to the passengers, today they disembarked from the “Adventure of the Seas” in Port Everglades, the port of Fort Lauderdale, 40 miles north of Miami, about 110 dogs, in addition to cats, birds and other pets, luggage and other cargo .

The ship will return to leisure cruises this October 6, when it is scheduled to sail from San Juan with passengers, this time of payment, for a Caribbean cruise with stops in Martinique, San Cristóbal and Antigua.

According to Royal Caribbean’s website, the company’s ships evacuated more than 5,500 people from its hurricane-affected Caribbean islands, excluding its own employees, and 122 domestic animals and moved one million pieces of cargo with help for the victims.