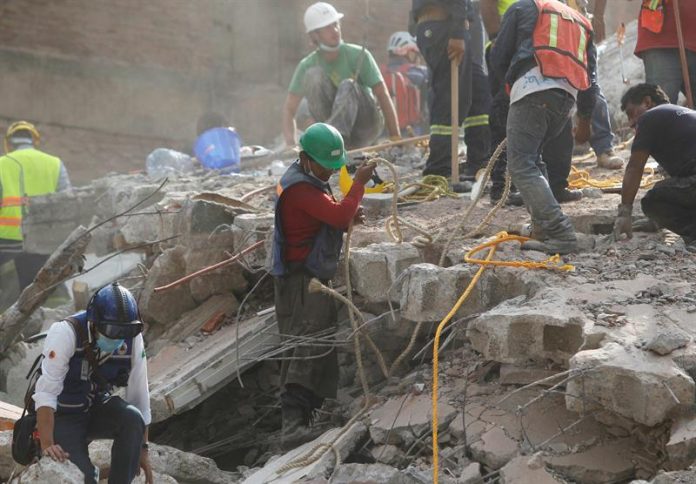 The death toll due to the earthquake of magnitude 7.1 on the Richter scale that shook central Mexico on Tuesday amounted to 224, informed today in Secretary of the Interior, Miguel Angel Osorio.

an interview with Televisa, Osorio said Wednesday morning that there are 117 deaths in Mexico City, 39 in the state of Puebla, 55 in Morelos, 12 in the State of Mexico and one in Guerrero. Other reports speak of three dead in Guerrero.

The secretary of the Interior indicated that they have registered 45 buildings that were totally or partially collapsed, in six of which it is considered that there are people trapped.

Shortly before, the Mexican president, Enrique Peña Nieto, established as a priority the rescue of people trapped in the landslides and the attention to those injured by the earthquake.

“The priority at this moment is to continue the rescue of those still trapped and to provide medical care to the wounded,” said Peña Nieto in a message on national network after a tour of some points in Mexico City.

The president stressed that thousands of members of the Army, Navy and Federal Police “assist the affected population.”

He said he works “in full coordination” with Mexico City’s head of government, Miguel Angel Mancera, and with the governors of Puebla and Morelos, “the entities that suffered the greatest damages.”

Emergency services are available to all people who require care, abounded.

“Unfortunately, several people have lost their lives, including girls and boys in schools, buildings and homes,” said Peña Nieto, and expressed his condolences to those who have lost a relative or loved one.

Earlier, in remarks to reporters visiting the area where a school collapsed in southern Mexico City, the leader said at least 20 children and two adults were killed and 38 others are missing in that sinking.

Accompanied by Mancera, said that 30 minors and eight adults are missing at the College Enrique Rebsamen.

He added that more than 500 members of the Army and Navy Secretariat, as well as 200 Civil Defense, are seeking survivors among the ruins of the school, where 14 children have already been rescued alive from the debris.