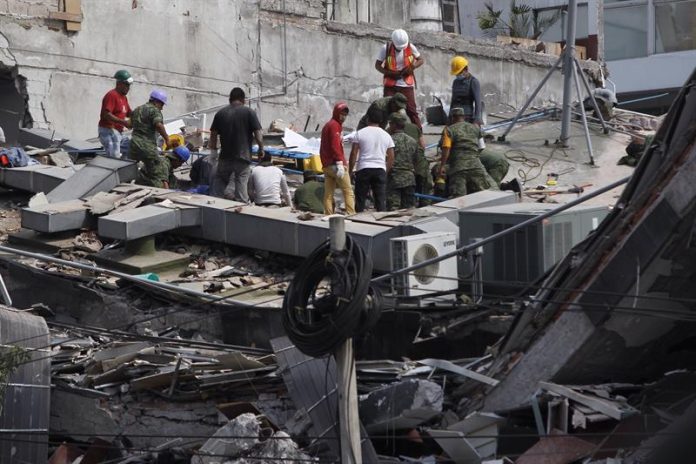 The earthquake of magnitude 7.1 on the Richter scale today collapsed at least a dozen buildings in different areas of Mexico City such as the colonies Condesa, Del Valle, Narvarte, Centro, Coyoacán and Xochimilco, among others.

The movement, which hit Mexico’s capital this afternoon, also caused numerous cuts in electric service, gas leaks and disrupted the telephone service, as well as the Metro, but no casualties have yet been reported.

After perceiving the movement, citizens who live and work in tall buildings captured the landslides of several buildings in the colonies Countess and Rome, affected in the earthquake that occurred just 32 years ago.

In the south of the city, in Coyoacán, the Church of San Juan Bautista suffered damage in one of its towers and in Xochimilco the parish of San Bernardino fell.

In this zone a video amateur registered the strong movement of the water of the channels. A giant wave crossed from side to side and removed the traditional trajineras.

In all affected areas there was damage to buildings, some of which were collapsed. Numerous fences collapsed and facades of public apartments and buildings collapsed in a capital where one can still breathe in fear.

School activities were suspended until further notice, as was the stock exchange session in Mexico City, to safeguard the safety of staff and facilities.

Citizens immediately went to the task of assisting and assisting in landslides and collapses.

The quake generated numerous scenes of panic in the capital of the country and occurred two hours after the citizens took to the streets of the whole country in a simulation commemorating the earthquake of 1985 of magnitude 7.1.

This time the earthquake felt stronger than the one registered just September 7, magnitude of 8.2 on the Richter scale, given that the epicenter was closer.

The earthquake of September 7, the most powerful since 1932 in the country, left 98 dead in the south of the country; 78 in Oaxaca, 16 in Chiapas and 4 in Tabasco.