Florida is struggling today to recover from the damage caused by Hurricane Irma, with more effort in the devastated Keys, in the extreme south of the US, where 14 deaths have been reported so far, seven of them in this state .

The chain of islands that make up the Keys, about 110 miles long and about 80,000 inhabitants, took the worst part after Sunday morning the eye of Hurricane Irma passed over Cudjoe Key and hit the area with fury .

Media images show boats driven into the interior by hurricane winds and powerful waves, as well as shattered trees, accumulated debris and damaged houses, while thousands of residents of these islands who decided not to evacuate, it is estimated that about 10,000, are trapped in the rubble.

Twenty-five percent of buildings in the Florida Keys, where Hurricane Irma hit Category 4 on Sunday, were totally destroyed and 65 percent were severely damaged, a spokeswoman for the Federal Emergency Management Agency (FEMA) said today. USA

Brock Long, a FEMA administrator, said they are still analyzing the situation on these small islets that represent the southern tip of the US, but that “basically every house in the Keys was impacted in one way or another,” CNN reported.

Florida Gov. Rick Scott noted that the most damaged areas are located between Key West and Marathon, both in the Keys, and where most of the overturned mobile homes are located.

Martin Senterfitt, the director of the Monroe County Emergency Control Department, to which the Keys belong, stressed that, despite the devastation caused by Irma, he estimates that the death toll would be low, although he said that the situation is of “humanitarian crisis”.

Authorities today allowed access to residents of the northernmost keys, while some neighbors told the local media their belief that the catastrophe could be worse.

So far, only seven people in Florida have died from causes attributable to Irma, the latest reported Monday afternoon when a 51-year-old man in Winter Park, a suburb of Orlando, was electrocuted.

Among those killed in the United States are three people in Georgia, two of them due to the fall of trees on a house and a vehicle, while in South Carolina, where four deaths were recorded, deaths were by fall of trees and traffic accidents.

Meanwhile, in Miami-Dade County (Florida’s east coast), which was hit by the hurricane’s outer bands, the outlook is a slow recovery. Little by little the streets are being cleared of debris, as well as of trees and fallen electric line.

The main problem remains the recovery of electric power in homes, at a time when 5.4 million users still do not have electricity in their homes, according to figures from the Florida Office of Emergency Management.

The company said it expects to return electric power to most customers in South Florida by the end of the weekend.

As for Miami Beach, the authorities reopened this morning the access roads to the city that were closed since Sunday, although 90% of the traffic signals are out of service and a curfew is maintained after 11 of the night for “security reasons,” according to the municipality.

Schools in Miami-Dade County, on the other hand, will reopen on September 18, as they suffered minimal damage.

Broward County, adjacent to Miami-Dade, also lifted the curfew today, although authorities urged the population to exercise extreme caution when going out into the street and driving with extreme caution as 50% of traffic lights they are out of order.

In addition, authorities are assessing the damage caused by Hurricane Irma in the Port Everglades, one of the most important in the eastern US, which receives and distributes fuel to twelve Florida counties.

Truck transport of gas tanks stored in this port before the arrival of the cyclone has already begun to take place, although it is unknown when the port will be reopened to receive new fuel. 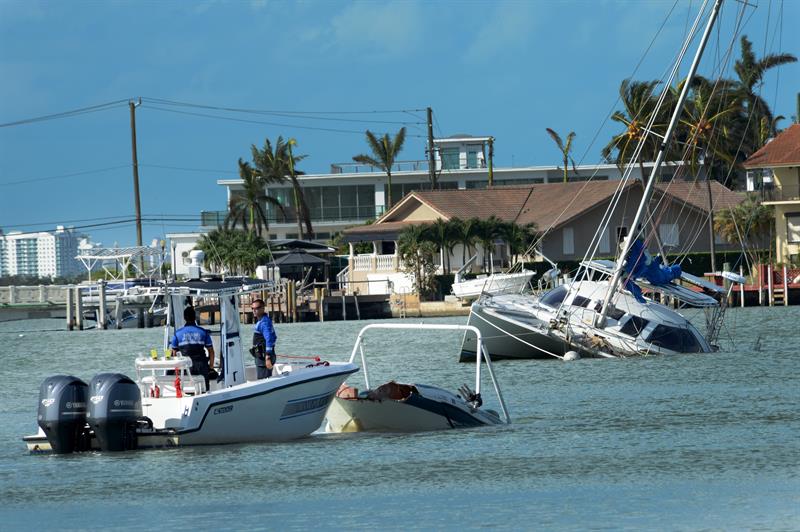 Miami International Airport (MIA) today has resumed its flights and air cargo service, albeit still to a limited extent. The first American Airlines flight took off this morning to Las Vegas.

“MIA will operate today with 30% of scheduled flights, a percentage that will increase daily until full recovery, possibly this weekend,” airport spokesman Jack Varela said in a statement.

Fort Lauderdale / Hollywood International Airport (FLL) also began operating some flights today, although it is not expected to regain full capacity until next weekend.

Chicago, - The #MeToo protest against sexual harassment arrived at the Chicago headquarters of US fast food giant McDonald's on Tuesday after it was...

Wall Street opens with gains and the Dow Jones rises 0.45%

New York, .- Wall Street opened Monday in green and the Dow Jones Industrial, its main indicator, rose 0.45% minutes after the start of...

The Taliban will allow the girls to return to secondary school "very soon," said UNICEF Deputy Executive Director Omar Abdi on Friday during a...
The legendary Dominican musician Johnny Pacheco, considered the father of salsa, died this Monday after not exceeding the state of gravity in which he...